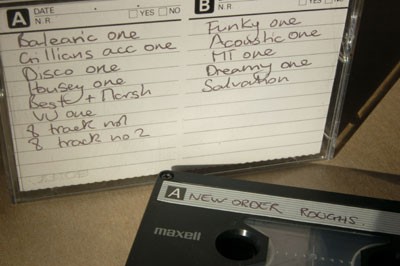 This features demo versions of the intended tracks for their 'Technique' album with their working titles. There has been some discussion as to what working title applies to what final song, the listing below should clear that up finally.

The track 'Salvation' is an entirely unreleased instrumental featuring sampled guitar parts and a keyboard sound reminiscent of that used on the earlier 'Salvation Theme', this may explain its working title.

thehappyone Says –
I also have a similar listing (most of side A only) on a DAT insert which was sent to me that I'll be scanning in shortly. The DAT itself though is missing these tracks.

Gaz Ulin Says –
Hi, i once had a copy of this DAT , it was doing the rounds in Manchester at one point , there are alternate lyrics to vanishing point, it was superb, do you know if its available anywhere please? Thank you !!
If you'd like to leave a comment, please Login. Login
Manchester Digital Music Archive is licensed under an
Attribution-NonCommercial-ShareAlike 4.0 International License.
Charity no. 1164179
Our archive currently contains 3821 Bands, 748 DJs, 1444 Venues, 302 Industry Professionals and 29213 artefacts contributed by 3962 members.