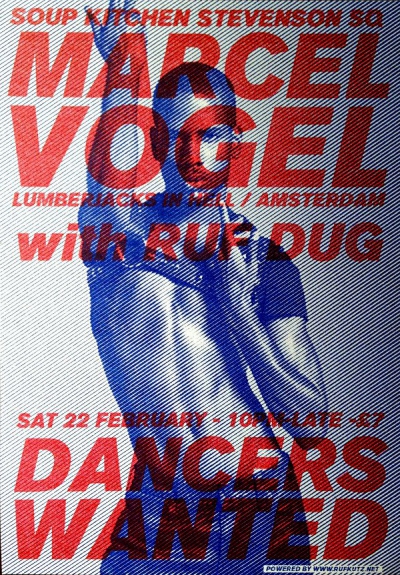 Ruf Dug returns to the dancefloors of Manchester with a bi-monthly residency in the Soup Kitchen basement - recently voted City Life's Manchester club of the year.

The former Wet Play co-founder spent 2013 releasing a bunch of critically-acclaimed records and DJing across the UK & Europe, including spots at Berlin's Panorama Bar and Plastic People in London.

Having made friends with a host of exceptional DJs on his travels, Ruf Dug is coming home for a series of dances where each time he will invite one of his pals to spin with him all night long in one of the very best spots for dancing in the rainy city.

For the first edition MARCEL VOGEL will be joining Ruffy from Amsterdam. The boss of the wildly successful LUMBERJACKS IN HELL label, Marcel has been responsible for releasing some of the most powerful jams of the last few years - the label's most recent release, the Chicago Service compilation, continues to top bestseller charts almost six months after its release; no mean feat in the pollyanna world of dance music. He has also been DJing all across the world and 2014 is already shaping up to be another fantastic year for him.

The already pounding Soup Kitchen soundsystem will be enhanced by the installation of Ruffy's custom-built audiophile analogue rotary mixer especially for the dance, and both Marcel and he are going to bring along a ton of lovely vinyl - expect only the very best in Disco, House, Techno, Afrobeat and beyond...

If you like to dance, we want you.
Artefact added : 11th February 2015
by Abigail