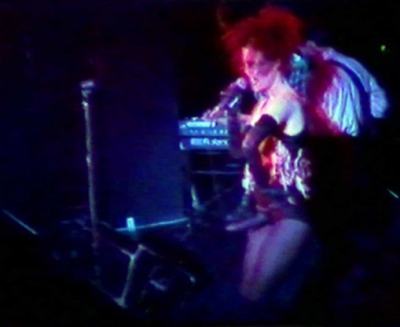 Here’s a quotation from Linder Sterling about that night taken from a recent paper by feminist academic and writer Sarah Feinstein.

MichaelP Says –
Has the video of this gig ever been released?

muninman Says –
I was there that night and I would love to see the full film if only to get a glimpse of my 19 year old self. A friend had invited me and it was my first visit to the Hacienda (which opened earlier that year I believe). Some bits are very clear in my memory such as the removal of the skirt, which was quite...amazing! I don't remember the bloodied tampaxes, nor do I remember the meat dress (which has grown in infamy due to Lady Gaga), but the gig is clear in my mind. Incidentally, member of the Mudhutters (who were from my village) were also there that night I have recently been reminiscing with them about the event. It was an amazing gig, no doubt about it.

Sarah F Says –
Brilliant to read this account. The only part of the video I have seen is at 90 second or so clip on youtube - youtu.be/Km4yWwmipBY.
If you'd like to leave a comment, please Login. Login
Manchester Digital Music Archive is licensed under an
Attribution-NonCommercial-ShareAlike 4.0 International License.
Charity no. 1164179
Our archive currently contains 3608 Bands, 704 DJs, 1320 Venues, 218 Industry Professionals and 19567 artefacts contributed by 3531 members.