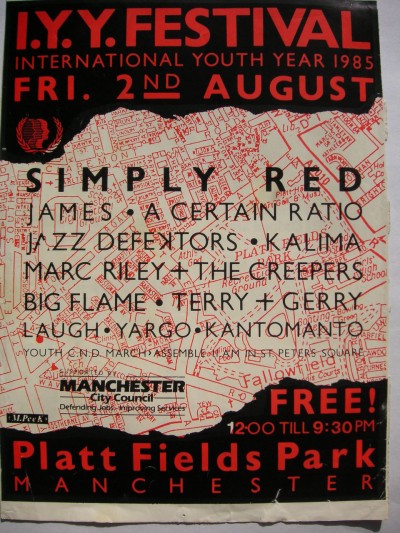 Don't think I made it along to this.

Mick Hucknall was few years above me at secondary school in Audenshaw. Lived a few roads behind us on the estate in Denton - just near the cycle path where I had my first kiss, a few yards from the sewage works and across the river from the boneyard which gave us the infamous Kingston Stink. Ah, the sweet smell of romance!

My Mam and Dad remember him when he was the "Pot Lad" collecting the glasses in Broomstairs Working Mens' club on Hyde Rd. Money was too tight to mention in those days. (Sorry!)
Artefact added : 5th June 2007
by Tony/Longfella

mat Says –
now i think i went to this... i vaguely remember watching James and it was absolutely pi**ing it down. there were about 14 people watching. don't remember any other acts tho.

jsz Says –
James played: What's The World, Summer Song, Black Hole, If Things Were Perfect, So Many Ways, Just Hip, Withdrawn, Hup-Springs, Chain Mail (info from oneofthethree.co.uk). I think you don't remember any other bands because we only cared about seeing James and the weather made it hardly worth sticking around.

mat Says –
i miss the platt fields festivals- there used to be some good stuff going on there.

Tony/Longfella Says –
Or maybe a band name? The Kingston Stinks? Kingston and the Stinks? All rights reserved! :-)

Brave Music Says –
I remember this well. Mick Hucknell got our bus from Piccadilly to Platt Fields. I remember Terry and Gerry and James, and Simply Red. I wish I could remember ACR! I was only 16 at the time. I loved Yargo and went to see them loads of times after...a sadly missed band.

Tony/Longfella Says –
I agree about Yargo - one of The Great Lost Bands. Basil Clarke - what a voice! Anyone know what happened to Basil?

They played the International once on Xmas Eve. Poet Lemn Sissay was the support - he's since told me it was his first gig. We went for Death By Curry at the infamous Plaza curry caff up the road afterwards. Early hours of Xmas morning. BIG Mistake!

Tony/Longfella Says –
Talking of Platt Fields, just remembered that the cover photo on Moz's Last of the Famous International Playboys single is Moz, aged about 7, up a tree in Platt Fields. (Reggie Kray, do you know which tree?)

Cooperman Says –
I seem to remember ACR never played at this gig. Jez, Martin & Andy did perform with Kalima.

Mike Noon Says –
Cooperman, I think you're right. Easterhouse definitely played as well, and Crispy Ambulance (or whichever band they turned into) played on the Piccadilly Radio mini-stage. I was living in Brighton at the time but came up for it. I did a write up on it in a fanzine I used to do which I'll have to dig out to 'check the facts'. (The ubiquitous John Robb was there, selling copies of Blackpool Rox).

Al Says –
I played trumpet with The Jazz Defektors at this gig and the particular thing I remember now is Tony Wilson advertising the gig on tele and telling people to get along to see us.
I also worked on the bar in a pub in Hulme called The White Horse and Big Flame drank in there. It was a good day out this, I predicted James would get nowhere - so much for opinion - I think the point about the Ratio's is right. A few of us had a very long session ending up in The Gallery, absolutely wasted, so the memory is a little bit blurred.

simong Says –
I was at this festival, I came across from Doncaster with a friend. It was a grey wet day and we didn't have the cash to go and hide in the pub, not that I can remember there being any nearby. Everyone was pretty much there to see James and most people, including us, left after their set. Big Flame were great though, as were the Creepers. From what I remember ACR didn't make it but yes, they were half of Kalima, who had, in the words of Mr Wilson, had a great Sade type singer before Sade had been thought of.

bouncy Says –
I was at this one too,back stage all week-end.I remember standing on the stage at the side(there were no wings) watching the drummer and bass player from Simply Red.Didn't the bass player marry a mud wrestler? I went to the Platt fields Festival last summer,I think it was a food and drink festival,so it lacked something.CP Lee and the Salford Sheiks were the best thing on.

mak Says –
good times... spent most of the time manning a stall in one of the tents for IYY with Roger, hanging out with him, Joseph, Robert, Skin etc - but floated about and managed to sneak onto the 'steps' backstage for Simply Red - dnt recall it peeing down - ('official' figures were 10k people at platt fields over the day) -maybe it drizzled a little n nesh people saw the sky falling in? or mebbe its just the hazy sunshine of youth and good memories

bouncy Says –
I don't recall it raining either. I can remember the sunshine and lots of people wearing dungarees with nothing underneath, Dexy's Midnight Runners style as was the fashion then, a bit different from the time I saw them at the Poly in 79. What a gig that was.

Debbie Says –
I remember it being red hot that day. The following year there was another festival in Platt Fields - Manchester against Apartheid and it rained then as I have photos and people have umbrellas up

Says –
I remember having sunburn - I might be a bit gingery but not to the extent I'm susceptible to it in the rain. Whatever the weather, it was a good day.
- edit

Simon Says –
It didn't rain in 1985. It rained in 1986 and I left after about half an hour. 1985 I stayed for the whole day.
ACR didn't play - Easterhouse stepped in
Never heard the Jazz Defeckors before this day but they stole the show for me - seem to remember going to see them at another free gig in Piccadilly a few weeks later
James were great. I enjoyed Simply Red too but I know people who left before they came on stage and seemed proud of the fact.
Laugh were good, and Mark Riley and the Creepers too.
Big Flame were a bit too unlistenable
1985 was a great year to be 17
If you'd like to leave a comment, please Login. Login
Manchester Digital Music Archive is licensed under an
Attribution-NonCommercial-ShareAlike 4.0 International License.
Charity no. 1164179
Our archive currently contains 3873 Bands, 759 DJs, 1464 Venues, 323 Industry Professionals and 29800 artefacts contributed by 4066 members.