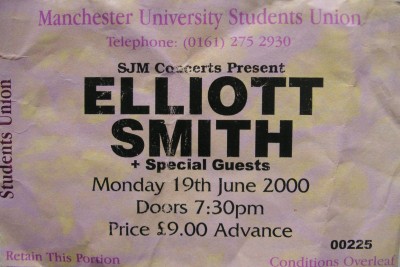 Elliott Smith's last Manchester show (I think) before his death in October 2003. A great solo acoustic gig, with one of those special atmospheres.

Was he murdered or did he stab himself through the heart? A tragedy either way. R.I.P.

There was a nice tribute evening at the Night and Day after his death.

mat Says –
i went to this and it was great, although i ended up pretty drunk and going to... you guessed it... big hands. the next day i'd totally forgotten i'd been to a gig!
If you'd like to leave a comment, please Login. Login
Manchester Digital Music Archive is licensed under an
Attribution-NonCommercial-ShareAlike 4.0 International License.
Charity no. 1164179
Our archive currently contains 3682 Bands, 734 DJs, 1355 Venues, 244 Industry Professionals and 22437 artefacts contributed by 3657 members.