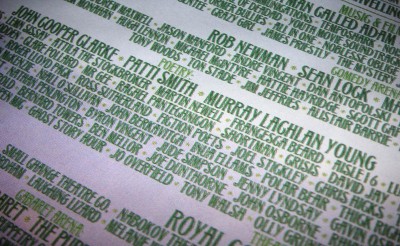 A close up of a full-page ad in the NME for the Stand Up Poetry tent at the Mean Fiddler’s first ever Latitude Festival in Suffolk, July 2006. A very sedate, civilised affair with music, comedy, cabaret, theatre, poetry, book readings, sunshine and nice toilets! Something of an NYC vibe with Patti Smith, Lenny Kaye, Tom Verlaine, Antony and the Johnsons etc.

Manchester was well represented in the excellent “Stand-Up Poetry” tent with JCC and Lemn Sissay plus other Manc poets Ben Mellor, Thick Richard and Tony Walsh (me!).

I got to hangout with JCC discussing Ronnie Spector, rock and roll, Mark E Smith’s increasing resemblance to Johnny Cash, Prestwich and the joys of camping.

I got a “Hi” from the legendary Patti Smith and two good chats with the equally legendary Lenny Kaye (Patti's guitarist and compiler of "Nuggets" collection.) The pair played a storming music gig then an intimate poetry gig (with a little backing) the following day. If you think I’m name dropping(!), Patti dropped in “Bobby” Dylan, her husband Fred “Sonic” Smith of the MC5, Robert Mapplethorpe, Bruce Springsteen and William Burroughs who rebuffed her teenage crush ( she would hail cabs for him outside the Chelsea Hotel) with “Patti. I am a homosexual!”

I got to do the Peter Kay “do you want a drinkie?” sign to rap/poetry superstar Saul Williams and to discuss Yargo, the International 1 and being “A Grumpy Old Man” with Lemn Sissay.

I Am Kloot were on the music bill and a “tired and emotional” looking John Bramwell arrived backstage as JCC was about to take the stage to see his old pal. The compere and programmer, Luke Wright of Aisle 16, introduced the great man with a big build-up only for Mr Bramwell to take the stage and re-introduce him for old time’s sake. Still as thin as a racing snake, JCC was in fine form with a set including an updated version of a gentrified Beasley St.

Abigail Says –
"...I remember you well in the Chelsea Hotel
you were famous, your heart was a legend.
You told me again you preferred handsome men
but for me you would make an exception."

Could Leonard have been singing about Patti and William?
If you'd like to leave a comment, please Login. Login
Manchester Digital Music Archive is licensed under an
Attribution-NonCommercial-ShareAlike 4.0 International License.
Charity no. 1164179
Our archive currently contains 3616 Bands, 704 DJs, 1321 Venues, 219 Industry Professionals and 19638 artefacts contributed by 3539 members.