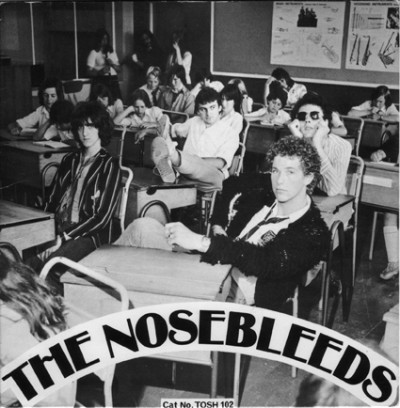 The cover to the band's only 7"... 'Ain't Been To No Music School'. The sigle was released on Tosh Ryan (full name Anthony Ryan-Carter) and Lawrence Beedle's Rabid Records (hence the catalogue number TOSH 102). The single sold well but the band didn't become successful. Vini Reilly was The Nosebleeds guitarist, later of Durutti Column (that's him in the stripey blazer). The sleeve photo was taken by Kevin Cummins who says...

"I don't remember anything significant about it really.
It was at the school that Vinnie Riley and 'Ed Banger' went to.
I remember them getting their old teacher to ham it up a bit by
pretending to hit one of them with a blackboard ruler (approx. 3 foot long)."
Artefact added : 5th June 2007
by mat

foreignpress Says –
The School was St. Pauls RC, Firbank Rd, Wythenshawe, also attended by Slaughter and the Dogs; Wayne Barrett and Mike Rossi, (and me) the jacket Vini's wearing is part of the girls school uniform, young rascal

mat Says –
vini fills it well! it's a great photo and a great punk sleeve.
If you'd like to leave a comment, please Login. Login
Manchester Digital Music Archive is licensed under an
Attribution-NonCommercial-ShareAlike 4.0 International License.
Charity no. 1164179
Our archive currently contains 3819 Bands, 743 DJs, 1437 Venues, 298 Industry Professionals and 28962 artefacts contributed by 3936 members.