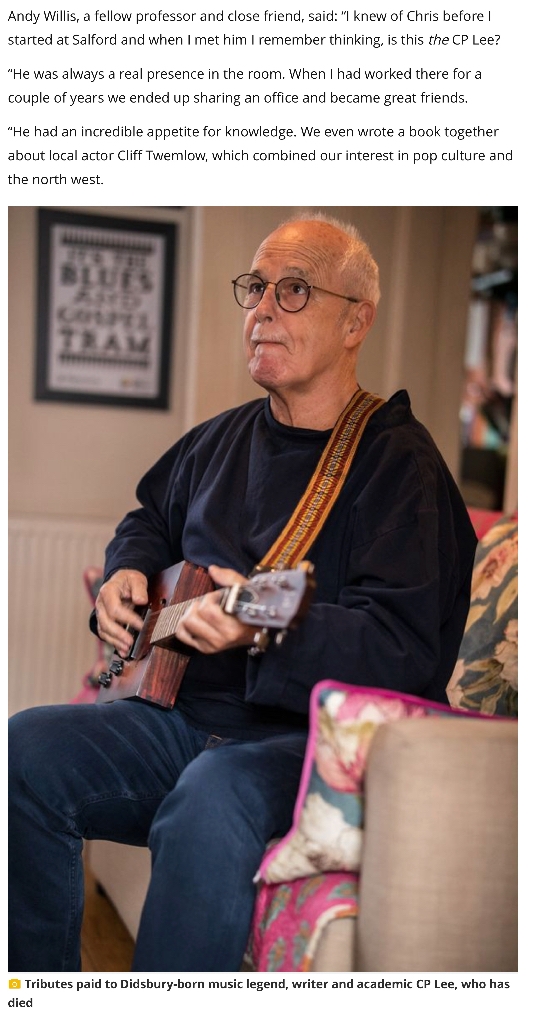 Image and Text from article by Manchester Evening News. Written by Vicki Scullard (TV and Features Writer) for Manchester Evening News on 29 July 2020, this piece highlights the contributions of Dr CP Lee to Manchester's cultural life. It includes quotes from: Andy Willis (Professor of Screen Studies, University of Salford and Curator at HOME) and Alison Surtees (MDMArchive). The article is entitled "The Manc music legend, writer and academic who gave so much to the city - RIP, CP Lee". The text reads:

Tributes have been paid to a Manchester music legend who has died aged 70. Chris Lee, known as CP Lee, was born in Didsbury in 1950 and as well as music, he excelled as a writer, broadcaster, performer and university lecturer. A student at The Manchester School of Art, CP’s passion for music was elevated in 1969 when he formed Greasy Bear along with his best friend Bruce Mitchell - also of The Durutti Column fame - as well as Ian Wilson, Steve Whalley and John Gibson. It would be more than 50 years later in 2016 that their debut album, Is Adrian There?, finally saw the light of day after being released by Vinyl Revival.

But CP was perhaps best known for heading up satirical rock outfit Alberto y Lost Trios Paranoias with Bruce - releasing three albums in the ‘70s. Their remarkable story is told in CP's own memoir, When We Were Thin, where he reveals how he produced one side of the first Factory Records release, ate muffins with Andy Warhol and became Elvis Costello for a day. This was one of many books that Chris would pen over the years - another, Shake, Rattle & Rain, is an adaption of his PhD thesis on popular music making in Manchester. A fanatic of all things Bob Dylan, Chris attended the infamous Free Trade Hall concert ‘Judas’ in 1966, of which he later wrote about in his book Like The Night (Revisited).

Anyone who has frequented the Kings Arms in Salford over the years will have likely run into Chris at some point - here he hosted a number of film, music and performance events at the venue. In more recent years he toured as CP ‘Ukule’ Lee in a bid to keep the Albertos legend alive by going on the road and performing his band’s hits.

Chris, who died suddenly on Saturday, is survived by his beloved wife Pam, 69, and stepsons Tom, 42, and Nick, 39. “He was so generous, and funny, vastly knowledgeable about music - both playing and listening - film, and everything Manchester,” said Tom, a professional violinist. “Chris was innovative and ahead of his time. He shone a light on Manchester’s countercultural music history, and his anarchic, left-wing politics brought the past to life. Our house was full of fun and while he could be crazy and hilarious, we learned a good deal from him and became slowly aware that over his lifetime our stepdad had become a legend - more than the sum of his many talents. All the above is mind-boggling but nothing more so than Chris leaving us in such an unthinkable and devastating way. But we’re working on making him immortal and our family so admire him - he was and is a legend.” His talents spanned further than music and writing - CP’s perfect comic timing saw him expertly reprise all of American comedian Lord Buckley’s performances, and delighted audiences with his reenactments.

A man of many guises, Chris somehow found time to become a hugely popular lecturer at University of Salford, where he passed on his encyclopedic knowledge about film. Andy Willis, a fellow professor and close friend, said: “I knew of Chris before I started at Salford and when I met him I remember thinking, is this the CP Lee? He was always a real presence in the room. When I had worked there for a couple of years we ended up sharing an office and became great friends. He had an incredible appetite for knowledge. We even wrote a book together about local actor Cliff Twemlow, which combined our interest in pop culture and the north west. Our work extended socially and we would often head to the King’s Arms and talk about our interests, along with tales of his life as a musician. He always had great stories to tell.”

Along the way, Chris managed to accumulate a string of “near misses”, of which Andy fondly remembers him revelling in. “He loved talking about when Albertos were supposed to be on Top Of The Pops and they were cancelled last minute because there had been a power cut, meaning their single was never given that push into the charts,” laughed Andy. “Or when his snuff-rock musical Sleak, which had done really well in the UK, was taken to New York City in 1980 - and it was cancelled after John Lennon was assassinated. Then there was the time he recorded a TV show that he hoped would be a hit, and it ended up being re-edited to be a children’s programme.” Andy continued: “It wasn’t just his talents that made him a good friend. I had some personally difficult moments during our time at Salford and he helped me through them. It’s the gregarious face that you see but in the quiet moments he was a really kind human being who I will never forget.”

In 2002, Chris became one of the founders of the groundbreaking MDMA (Manchester and District Music Archive) site - a digital music archive that celebrates Greater Manchester music and its social history. Alison Surtees, who worked with Chris to launch the archive and also alongside him at university, said: “He was brilliant. Such a lovely man. He was ahead of his time but he never got the recognition that he deserved. He was underground and had incredible passion not just for music but also comedy, film and anything related to Manchester.He was eclectic and prolific and became an accomplished writer and performer, as well as a pundit on various TV programmes. He did everything. I know a lot of people cite Tony Wilson as the recognisable face of Manchester, but you can’t discount Chris’ incredible contribution to the city.”

An online version can be found at www.manchestereve...
Artefact added : 3rd August 2020
by Sarah F