Dave Prentice and the Paiges
Photograph
1963 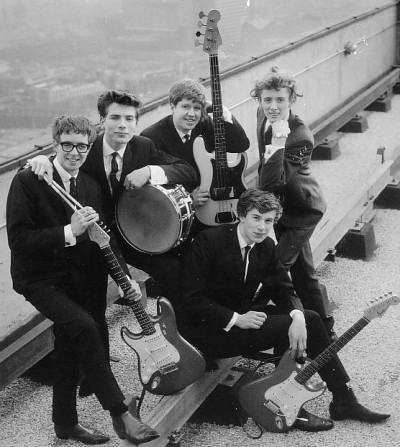 I played rhythm guitar with The Paiges until 1964 when I left to go to Sheffield Uni. We were Fender throughout of course - my red strat, Terry's blue sparkly left handed strat (special import) and Fred's Fender bass. Drummer Johnny Hutch later worked for Island records for a while but I lost touch with the others.

Our best moment? Beating Herman's Hermits in a talent competition - I think we came 2nd and they came 3rd. Don't know who won - but I think they played Red Sails in the Sunset.

Love to hear from anyone who remembers us - or from the lads themselves of course.
Artefact added : 30th June 2007
by Mike Lydiat

Mike Lydiat Says –
The photo was taken by a newspaper photographer on top of the CIS building in Manchester. Did you know the Paiges?

winstanc Says –
i knew dave many moons ago ,not in the 60s more like 90s

Mike Lydiat Says –
I have mp3s of 2 tracks - emal me and I'll send them on - mike@docsworkshop.co.uk
If you'd like to leave a comment, please Login. Login
Manchester Digital Music Archive is licensed under an
Attribution-NonCommercial-ShareAlike 4.0 International License.
Charity no. 1164179
Our archive currently contains 3873 Bands, 759 DJs, 1464 Venues, 323 Industry Professionals and 29805 artefacts contributed by 4067 members.