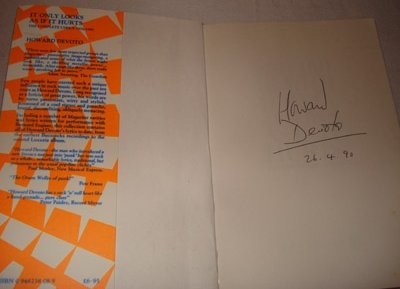 Howard Devoto's autograph in his 1990 lyric book 'It Only Looks As If It Hurts'.

This came from a book signing event at Virgin Records in my current town (not Manchester), as seen advertised in the music press. I believe they occurred in other areas at the time.

There was no-one else waiting to see Howard so I became a little nervous & quickly ran out of the shop after he'd put pen to paper.
Artefact added : 1st August 2007
by Red hot pepper