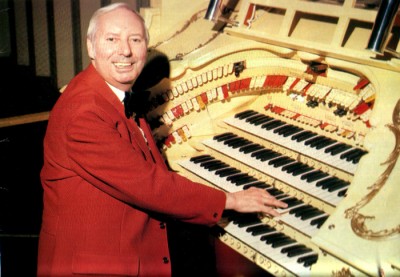 Front cover shot of Eric Barlows "Ballroom Magic"
Showing the Free Trade Halls Mighty Second Hand Wurlitzer.
Which I think some one said is now at Stockport Town Hall?
What a beast! ,As far as I can remember it didnt rise up as they often do ,it was high up stage left ,i used to gaze in wonder at it during long Lynard Skynard guitar solos back in the 70s.
Artefact added : 13th September 2007
by graham

When the Odeon became a multiplex, the organ was installed in the Free Trade Hall. It took 4 years to install it, and it was first used in September 1977.

When the Free Trade Hall closed in 1996, the organ was removed and installed in the Great Hall of Stockport Town Hall, first being used in 1999.
If you'd like to leave a comment, please Login. Login
Manchester Digital Music Archive is licensed under an
Attribution-NonCommercial-ShareAlike 4.0 International License.
Charity no. 1164179
Our archive currently contains 3870 Bands, 758 DJs, 1461 Venues, 323 Industry Professionals and 29719 artefacts contributed by 4047 members.