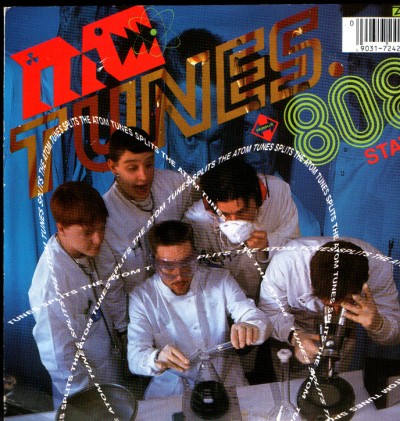 cover for "Tunes Splits The Atom" by Mc Tunes vs 808State
Cover Photograph was taken by Gary McLarnon (yes the Potential Development/Mr Scruffs manager one) @ Christies Hospital in one of the labs..The Graphics are by Trevor Jackson who later went on to run Output Records in London.
The Video for this single was produced by Swivel ,a Manchester based production company based out of the lighting box at the Hacienda..Shot in and old BBC studio /converted church in Longsight. The Video for "The Only Rhyme That Bites" was
shot in The Daily Express Building on swan street when it was derilict..produced and directed by Ken Horn ( ZTT Trevor Horns Brother) who was at the time a director on Emerdale and Brookside ..
Artefact added : 28th September 2007
by graham

mat Says –
how did this collaboration come about?
If you'd like to leave a comment, please Login. Login
Manchester Digital Music Archive is licensed under an
Attribution-NonCommercial-ShareAlike 4.0 International License.
Charity no. 1164179
Our archive currently contains 3608 Bands, 704 DJs, 1320 Venues, 218 Industry Professionals and 19567 artefacts contributed by 3531 members.