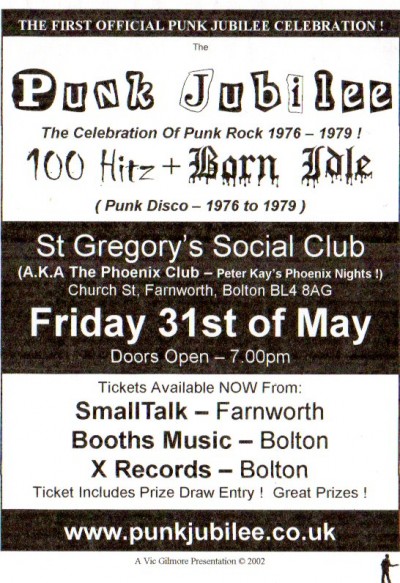 Flyer for punk jubilee gig featuring manchester punk band "born idle"....promoter vic told the band after the show that they would'nt be doing any more as they were too good.??...the band did eventually get asked back.

Drummer on this ocasion was once again darran...and i seem to remember another vomiting incident courtesy of said drummer.....(greasy tea's eh)
Artefact added : 19th December 2008
by foz

Darran Says –
No greasy tea that night........just Vimto and some sherbert - hence: the delightfully coloured psychedelic 'yawn' backstage in the dressing room sink. Purple rain. I make no apologies.......I was poorly.

foz Says –
that dressing room is tiny..it looks bigger on the tele..not enough room to swing a cat..just enough room however to barf, and as for the colour i'll take your word for it as i had no desire to inspect your up throws.

Darran Says –
The sink was even tinier.......I had to finish the job in a pint glass;-)
Dave Spikey must never 've had a flannel wash in that sink, though.......with his white hair, he'd 've ended up with a purple rinse!
If you'd like to leave a comment, please Login. Login
Manchester Digital Music Archive is licensed under an
Attribution-NonCommercial-ShareAlike 4.0 International License.
Charity no. 1164179
Our archive currently contains 3660 Bands, 724 DJs, 1346 Venues, 234 Industry Professionals and 22139 artefacts contributed by 3610 members.