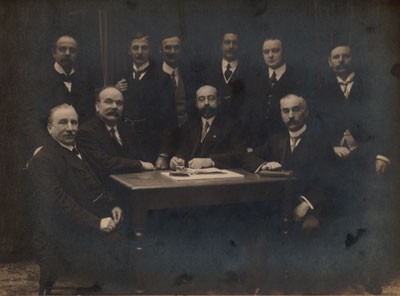 This photograph is dated 1910 and shows a group of gentlemen who made up the board of the Musicians Union.

The M.U. started in Manchester towards the end of the 1800s as a result of the musicians of the Halle Orchestra having to play more and more concerts, extra work which wasn't reflected in their wages.

The man in the centre of the picture is Mr. Joe B. Williams, General secretary and founder of the M.U. He was also a clarinet player in the Halle Orchestra.

The M.U. was based in Manchester, the registered office being 135 Moss Lane East, Manchester (in Rusholme). by 1921 a second office had opened in London which eventually became M.U. H.Q.

If anyone would like to write a more concise and accurate piece about the history of the M.U. and in particular about it's roots in Manchester, please get in touch.
Artefact added : 5th June 2007
by mat