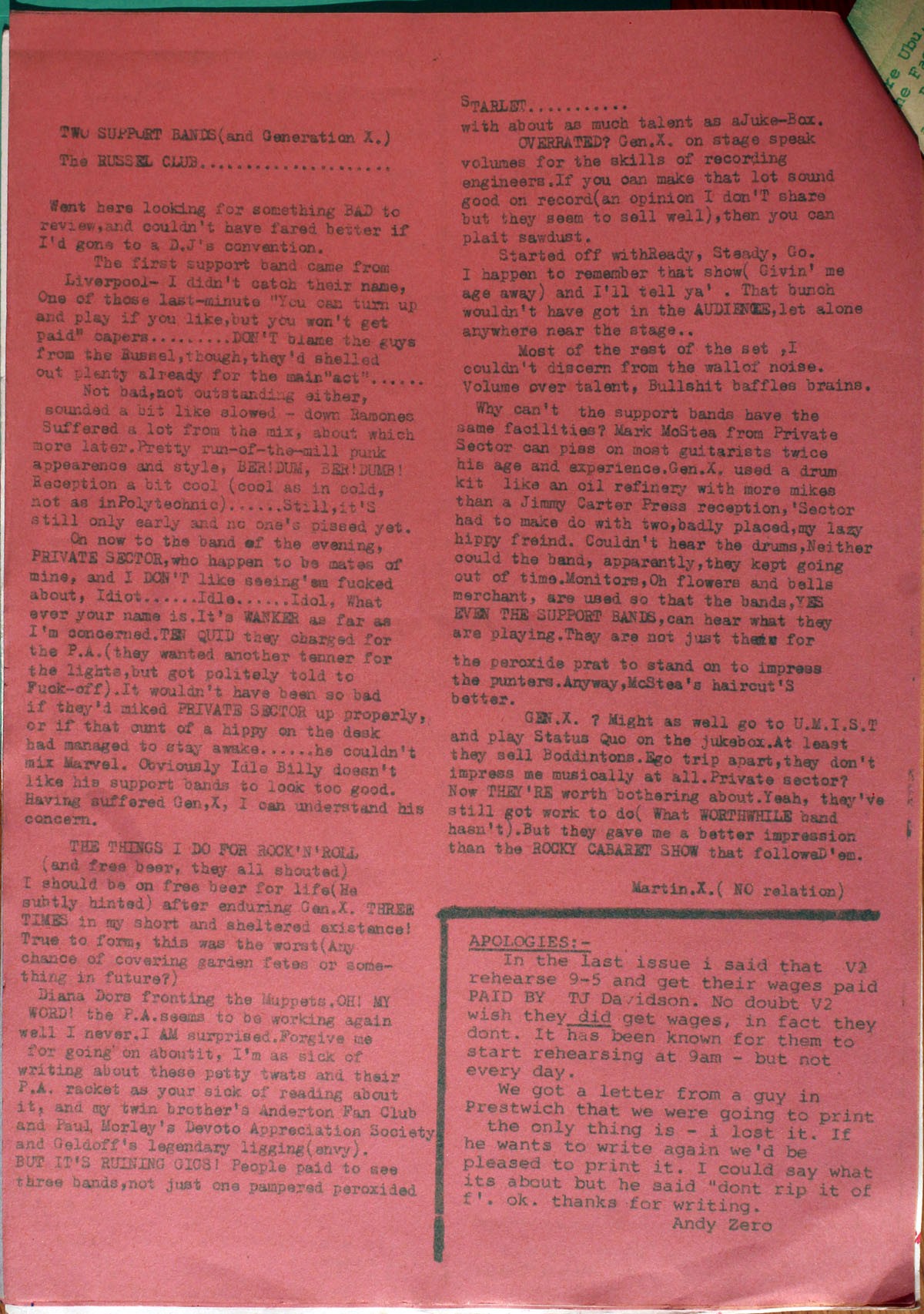 TWO SUPPORT BANDS( and Generation X)
The RUSSEL CLUB....................
Went here looking for something BAD to review,and couldn't have faired better if I'd gone to a D.J's convention.
The first support band came from Liverpool- I didn't catch their name, One of those last-minute "You can turn up and play if you like,but you won't get paid" capers.....DON'T blame the guys from The Russel,though,they'd shelled out plenty already for the main"act".....
Not bad,not outstanding either, sounded a bit like slowed-down Ramones Suffered a lot from the mix, about which more later.Pretty run-of-the-mill punk appearence and style, BER!DUM, BER!DUM! Reception a bit cool (cool as in cold, not as inPolytechnic).....Still,it'S still only early and no one's pissed yet.
On now to the band of the evening, PRIVATE SECTOR,who happen to be mates of mine, and I DON'T like seeing 'em fucked about, Idiot....Idle....Idol, Whatever your name is.It's WANKER as far as I'm concerned. TEN QUID they charged for the P.A.(they wanted another tenner for the lights,but got politely told to Fuck-off). It wouldn't have been so bad if they'd miked PRIVATE SECTOR up properly, or if that cunt of a hippy on the desk had managed to stay awake....he couldn't mix Marvel. Obviously Idle Billy doesn't like his support bands to look too good. Having suffered Gen, X, I can understand his concern.
THE THINGS I DO FOR ROCK'N'ROLL
(and free beer they all shouted) I should be on free beer for life (he subtly hinted) after enduring Gen.X. THREE TIMES in my short and sheltered existence! True to form,this was the worst(Any chance of covering garden fetes or something in future?)
Diana Dors fronting the Muppets. OH! MY! WORD! the P.A.seems to be working again well I never.I AM surprised.Forgive me for going on aboutit, I'm as sick of writing about these petty twats and their P.A. racket as your sick of reading about it, and my twin brother's Anderton Fan Club and Paul Morley's Devoto Appreciation Society and Geldoff's legendary ligging(envy). BUT IT'S RUINING GIGS! People paid to see three bands,not just one pampered peroxided STARLET.................... with about as much talent as aJuke-Box.
OVERRATED? Gen.X. on stage speak volumes for the skills of recording engineers.If you can make that lot sound good on record(an opinion I don'T share but they seem to sell well), then you can plait sawdust.
Started off withReady, Steady, Go. I happen to remember that show( Givin' me age away) and I'll tell ya' . That bunch wouldn't have got in the AUDIENCE,let alone anywhere near the stage..
Most of the rest of the set , I couldn't discern from the wallof noise. Volume over talent, Bullshit baffles brains.
Why can't the support bands have the same facilities? Mark McStea from Private Sector can piss on most guitarists twice his age and experience.Gen.X, used a drum kit like an oil refinery with more mikes than a Jimmy Carter Press reception, 'Sector had to make do with two,badly placed,my lazy hippy freind. Couldn't hear the drums,Neither could the band, apparently they kept going out of time.Monitors,Oh flowers and bells merchant, are used so that the bands,YES EVEN THE SUPPORT BANDS,can hear what they are playing.They are not just there for the peroxide prat to stand on to impress the punters.Anyway,McStea's haircut'S better.
GEN.X. ? Might as well go to U.M.I.S.T. and play Status Quo on the jukebox.At least they sell Boddingtons. Ego trip apart, they don't impress me musically at all. Private sector? Now THEY'RE worth bothering about.Yeah, they've still got work to do( what WORTHWHILE band hasn't). But they gave a better impression than the ROCKY CABARET SHOW that followeD'em.
Martin.X.( NO relation)

APOLOGIES:-
In the last issue I said that V2 rehearse 9-5 and get their wages PAID by TJ Davidson. No doubt V2 wish they did get wages, in fact they don't. It has been known for them to start rehearsing at 9am - but not every day.
We got a letter from a guy in Prestwich that we were going to print the only things is - I lost it. If he wants to write again we'd be pleased to print it. I could say what it's about but he said "don't rip it off'. ok. thanks for writing.
Andy Zero