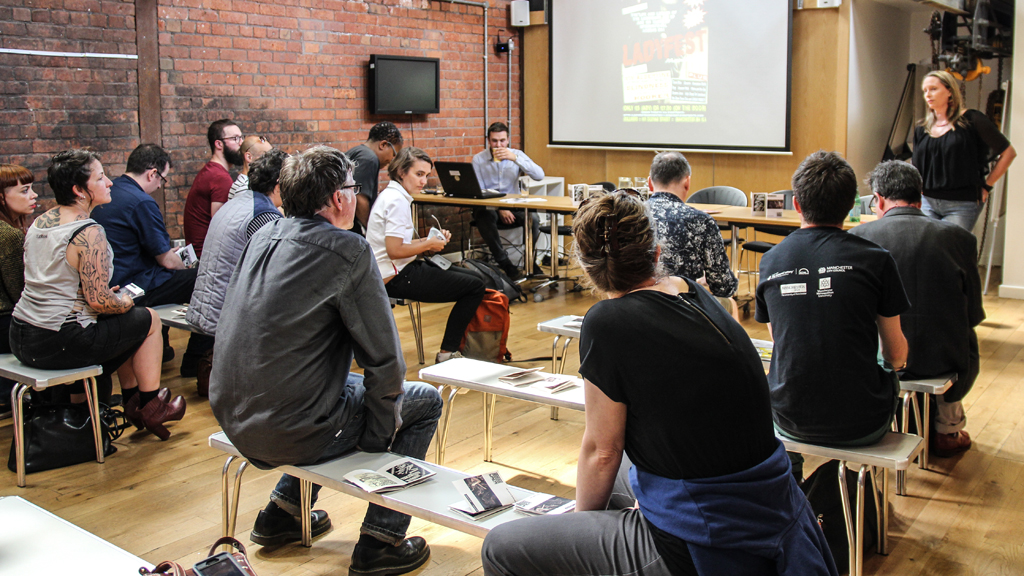 Alison is a co-founder of MDMArchive. As a creative producer, consultant and project manager, she has over 25 years’ experience, developing talent and projects across diverse art forms. Her current work includes establishment of a new trust, Future’s Venture, which will provide funds to artists for radical arts practice. She is a creative collaborator with In Place of War, working on international development projects involving cultural spaces, entrepreneurialism and connecting artists from across the world. She is director of Fuse Art Space (Bradford) and a board member of Ordsall Community Arts (Salford).

She offers the archive support around strategy and fundraising; delivers events and exhibitions; and manages filmed archival material.

Alison curated Suffragette City: Women in Manchester Music at The Refuge in 2018.

Matthew Norman works in public engagement and learning at Imperial War Museums. Drawn to the city from an early age, Mat came to Manchester as a student in 1985. During the late 80s he worked at the Hacienda before starting a job at Manchester's largest second hand collector's shop, Vinyl Exchange. In 2002 Mat left the shop to become a freelance videographer and worked with artists such as Doves, Elbow, Lamb, Badly Drawn Boy and 808 State, as well as with numerous arts organisations and charities. In 2013 he visited Syria with Manchester-based charity Syria Relief to document their work during the ongoing conflict and has since worked overseas with various refugee charities.


Mat is one of the archive's curators and events programmers. His events include ‘Defining Me’ exhibition at The Lowry,  'The Manchester Room' for Urbis' 'Punk' exhibition and the all-day 'Electrospective' event at Islington Mill.

Abigail Ward is an award-winning curator, musician, writer and DJ with over 15 years' experience in the music industry and cultural sector. She left the organisation in 2020 to focus on her music career. Abigail developed the MDMArchive website with web designer Ashley Kennerley in 2004-2005, going on to win two Big Chip Awards. She specialises in Greater Manchester music history; music and disability; and LGBT+ culture in Manchester. As a DJ and musician she has played across Manchester at venues such as YES, the Refuge, Manchester Art Gallery, HOME and the Deaf Institute.

Abigail has curated the following physical exhibitions for MDMArchive:

– We Are Dynamite! Northern Carnival Against the Nazis 40th Anniversary exhibition at NIAMOS
– Queer Noise: The History of LGBT+ Music and Club Culture in Manchester at People’s History Museum
– Defining Me: Musical Adventures in Mcr – a major exhibition exploring music & identity at The Lowry
– Unknown Pleasures: a Joy Division exhibition at Macclesfield Museum

Her online exhibitions for MDMArchive include:

Cultural historian, author, performer and lecturer Dr CP Lee wrote widely about Manchester music. His book 'Shake, Rattle and Rain: popular music making in Manchester 1955-1995' was a source of inspiration to all of the MDMArchive co-founders. CP represented the organisation on TV and radio many times and at two major seminars.

Since performing with 1960s Manchester band Greasy Bear, forming the avant garde Alberto y Lost Trios Paranoias, writing a few music books, then for 25 years being a lecturer at the University of Salford, it was CP's solemn quest to never let his passion for ukulele playing get in the way of actually never working.

Renowned Haçienda DJ Dave Rofe now manages Doves and Jimi Goodwin. In 2014 Dave co-ordinated the ‘Defining Me’ exhibition at The Lowry, Salford. He left the organisation in 2017.

Dave Carter is currently Honorary Research Fellow at the Centre for Urban Policy Studies (CUPS) at the University of Manchester. He spent 27 years in economic development for Manchester City Council and was Head of the Manchester Digital Development Agency from 2004-14. He has worked on key aspects of the Commonwealth Games (2002), the Manchester International Festival and the Future Everything Festival. He’s now involved in research on smart cities, amongst other things.

Cathy is a charity manager and bass player who moved to Manchester to study, inspired by the city’s independent music scene. Her bands over the years have included the Performing Ferrets, Peel favourites Dub Sex and Calvin Party, and currently The Rainkings. Cathy is co-founder and Deputy Director at Radio Regen, a charity supporting the development of community radio stations in Manchester and nationally, and Finance Manager of the Community Media Association.

Sarah was born in Detroit and spent her youth longing for Manchester via vinyl. She has worked in the cultural sector for over seventeen years, both in the USA (Ladyfest, National Gallery of Art, DC Underground Film Festival, Smithsonian Institution) and the UK (Women’s Art Library, Pankhurst Heritage Centre Museum, Prisons Memory Archive). Currently, she is a PhD researcher at the Institute of Cultural Practices, University of Manchester.

Drew Ellery is the Digital Officer of the AIU Race Relations Resource Centre. He has over two years of experience volunteering and collaborating with Manchester Digital Music Archive. In 2017 he completed his year-long archives traineeship based at Archives+. He was later awarded recognition from The National Archives for his work archiving the history of The Mancunian Gay magazine. Currently, he is an MA student at the University of Manchester studying Art Gallery and Museum studies.

Aidan O’Rourke, writer-photographer and tutor, has documented the changes in Manchester since 1996 in photographs and words. He has a strong interest in Manchester music, and was one of the official photographers at the In The City music convention, working closely with Tony Wilson. He co-presents a music radio show on ALL fm. He has contributed to several books on Manchester and produces a weekly feature in the Manchester Evening News with photos and editorial.

Darren Jones is a Mancunian. He is currently the Technology Operations Manager at dock10, the UK's leading television facility based in the heart of MediaCity in Salford. In a broadcast career spanning over 25 years, he has worked at Granada ITV, Lime Pictures, Yorkshire TV and the BBC. Working on programmes such as Coronation Street, Match of the Day, The Voice, Stars in their Eyes.... and his all-time favourite, the Sooty Show.

Before starting in television Darren was the guitarist in Manchester band Rig who released singles on the Cut Deep and Dead Dead Good record labels in the early nineties at the height of Madchester.

As the self-appointed librarian and photographer of the band, he unwittingly started the journey on his archivist career by collecting press clippings, tickets, posters and documenting the period through his photographs. Recently Darren returned to that period and wrote and published the band’s story and archives online. As part of this process the band’s records have all been re-released along with a debut album featuring unheard music from over thirty years ago.

Mike Noon is a Salfordian. He went to the same primary school as Ewan MacColl and Mike Leigh. Which means nothing but is sweet. Currently works for Arts Council England. Previously paid to work for City Life, i-D, Melody Maker, Select and more. Proudly volunteered for City Fun and Debris. Wrote and published many fanzines in partnership with Graeme Park, Richard Hector-Jones and Jay Taylor (but not all at the same time). Analogue loyalist. Digital thief. Amateur archivist.

Heather Roberts is the College Archivist for the Royal Northern College of Music, and uses MDMA for RNCM digital exhibitions. She's also a freelance archivist, working across sectors helping small to medium size organisations build & manage their archives from scratch. Heather is a Trustee of the Co-operative Heritage Trust and organises the Greater Manchester Archivists' Group.

Rod is the creator/promoter of Bollox club and digital content producer with expertise in equality politics and protocols. He worked at the Equality & Human Rights Commission as a digital content manager for a number of years. Rod is also a branding strategist with a passion for the community projects.
He is a member of the Queer Alt Manchester network. Rod co-curated the MDMArchive digital exhibition, Manchester Academy Memories. He is now a marketing officer for The Deaf Institute.

Jane grew up in Manchester in the 1980s and 90s, enjoying the gigs and clubs of the city, and has always had a keen interest in music of all types. After moving to live on the south coast, and then working abroad for a number of years in Slovakia and San Francisco, she is now settled back in South Manchester. Jane has worked for many years in heritage and archives including projects at the John Rylands University Library, the National Fairground and Circus Archive and Manchester Histories. She has worked on a number of exhibitions including co-curating the Manchester City Life award winning Belle Vue exhibition. Jane has attended and helped at the many events that MDMArchive from early on, and brings her skills in digitisation and research to volunteering.

Markus Hetheier is an electronic music producer, sound artist, cultural practitioner and researcher.  He studied different modules, including Introduction to Music Production and Music Business, at the School of Electronic Music in Salford and completed an MA in Arts Management, Policy and Practice at the University of Manchester. He has since performed under his stage name Industries at different venues and music and arts festivals in Germany and the UK, including the Sounds From The Other City festival in Salford. He has previously managed the exhibition opening nights for ’Suffragette City’, MDMA’s exhibition on important women in Manchester’s music history, and 'Bertha: Seen&Heard', a student-led exhibition in collaboration with the youth mental health charity 42nd Street on Bertha Hindshaw, Manchester’s first paid female curator. He is currently working as Data & Reporting Co-Ordinator at Contact, a theatre focusing on the involvement of young people based in Manchester. He has also recently started his practice-based PhD at the Manchester School of Art where he will use soundmaps and psychogeography to explore the relationship between the self and the city.

Catherine is a PhD student studying ethnomusicology at Indiana University. She has worked in a number of music archives across the US including the American Folklife Center at the Library of Congress, the Archives of Traditional Music at Indiana University, the University of Washington Ethnomusicology Archives, and the ARChive of Contemporary Music. She was introduced to the MDMArchive during a postgraduate research exchange at the University of Manchester and is currently working on a doctoral dissertation focused on community music archives and the affective dynamics of community archiving.