Danny And The Dressmakers
Badge
1978 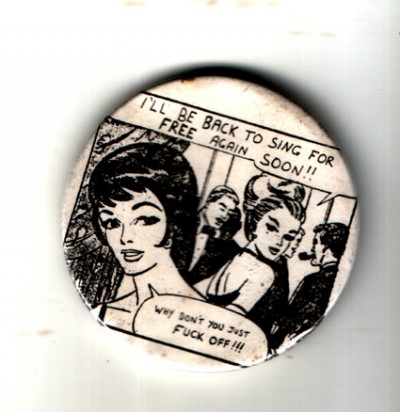 tour badge from the "Fuck Off "Tour
various groups trawl the country in a converted ambulance
playing for free,
Danny and The Dressmakers and Rochdales own Wilful Damage
being two.Mostly University gigs,the tour was turned away from MCR Poly and spent the night sleeping in the derelict Deaf Hospital before carrying on to Birmingham and beyond,at some point later on the tour visted talent night at the Woodcock in Hulme.
Artefact added : 5th June 2007
by graham

Abigail Says –
I fucking love this.
If you'd like to leave a comment, please Login. Login
Manchester Digital Music Archive is licensed under an
Attribution-NonCommercial-ShareAlike 4.0 International License.
Charity no. 1164179
Our archive currently contains 3734 Bands, 739 DJs, 1424 Venues, 261 Industry Professionals and 27929 artefacts contributed by 3861 members.