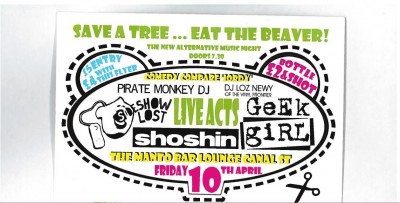 This is the very first flyer designed by Louise Cowley (who also DJ'ed the events as Pirate Monkey) for my first clubnight - Eager Beaver (Formerly Save A Tree....Eat The Beaver). An idea by Vicky Jones, General Manager at Manto which was to offer something different instead of the usual pop and dance being played throughout Canal Street. Launched in April 2009, on an unsuspecting dance crowd at Manto, Eager Beaver, I'm proud to say was the first and only weekly indie/alternative/electropop and rock night for women based on Canal Street and ran for a year upstairs in Manto's Lounge, despite the venue being known for dance music.
Vicky even walked up and down Canal Street in a beaver suit handing out flyers to the Village regulars sat outside and to those walking down the street! Later Eager Beaver became a mixed gay night called INDIElicious but still playing alternative music for those wanting something different from regular Canal Street venues.