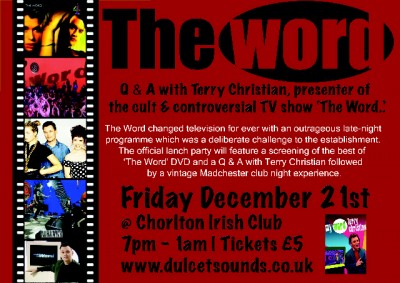 The Word 'changed television for ever with an outrageous late-night programme that was a deliberate challenge to the establishment' The Guardian commenting about the word.

Often controversial, always manic, but never dull - The Word defined an era of youth television. Dec 2012 sees the official DVD launch of 'The Word' and Q & A with Terry Christian' will feature a screening of 'The Word' which includes interviews with Nirvana / Oasis.

Doors at 7pm, bar until at least 1am
Tickets £5 via www.dulcetsounds....
Artefact added : 5th December 2012
by dulcetsounds