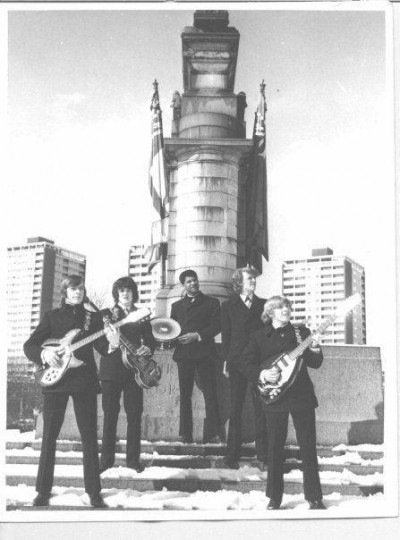 Tab writes : 'My Band 1969/1970 we were just contracted to do a world cruise on the P and O lines...this photo was in the Rochdale Observer with the headline.....Lucky Lads to sail the world....we broke up shortly after due to disputes...who knows were it would have taken us (sigh). — with Andrew ?? Beatle Bass, Clarence Lancelot James, Trevor ? Roadie and Geoff Hayward.
Clarence the drummer was Killed outside the Kingsway hotel...drunk driving.
Andrew Beatle bass was replaced by Geoff Hamer who died on stage (electrocuted ) amp was not grounded.'
Artefact added : 19th January 2013
by Alastair