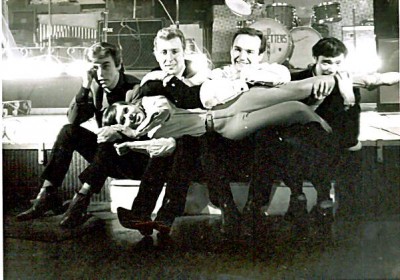 Frankie & The Trendsetters were from Barrow In Furness in Lancashire but based in Salford during 1964 -1965.
The band played all over Greater Manchester and shared alternate day residency at The Plaza Ballroom alongside Herman's Hermits.
The Trendsetters were Frank Hill Guitar & Vocals, John Hutchinson Bass, John Duffield Drums, Barry Parsons Lead Guitar.
The band are pictured here with the Decca recording star 'Little Frankie' who the band were asked to take on board for a while to give her the experience of performing with a live band.
Despite what other sites may stipulate, it is the Trendsetters who recorded with Little Frankie on the single 'The Kind Of Boy You Cant Forget' not The Country Gentlemen as indicated.
The deep backing vocals in the song were given by drummer John Duffield.
Artefact added : 18th February 2013
by alan wilkinson