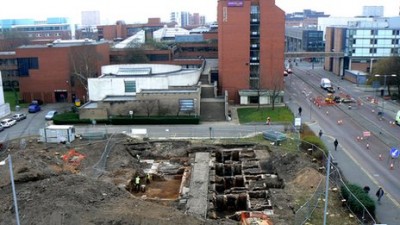 A club where Friedrich Engels spent time during his early years in England has been uncovered by archaeologists in Manchester.

Remnants of The Albert Club, founded by Germans in the 19th Century, were found during building work on the new £61m National Graphene Institute (NGI).

Engels joined the club when he arrived to work in Manchester in 1842.

The experience of Manchester workers inspired his book The Condition of the Working Class in England.

Engels was the co-author with Karl Marx of The Communist Manifesto in 1848.

NGI will house research into the substance graphene, which has been described world's thinnest, strongest and most conductive material.

Nobel Prize laureate Professor Kostya Novoselov intends to use a sink, discovered intact in the excavations, in the institute when it opens in 2015.

"It was an unexpected and pleasant surprise to find these fascinating remains at the site of the institute," he said.

"We have been very careful to record these remnants of the Industrial Revolution and we will look to keep some artefacts for use in the new building or elsewhere," he added.

It had been owned by architect Jeptha Pacey as his private villa, prior to its conversion into a private social club.

The cellars of five properties along the former Lawson Street have been discovered, together with the rear yards of larger houses that fronted on to Booth Street East.
Artefact added : 2nd March 2013
by Alastair