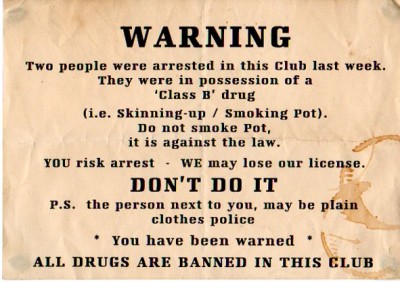 DO NOT SMOKE POT, IT IS AGAINST THE LAW.!

somewhat hilarious warning that i liberated from a jillys all nighter whilst partying like it was 1999...it also goes on to warn people that the person next to you may be plain clothes plod....like you had to tell people, they stood out a mile.....i did see the plain clothes boys a couple of times including one time when one of them had got into the party spirit and was absolutely off his face....judging by the size of his pupils it was a
safe bet he was'nt pissed...they was like saucers.
i later saw one of his superiors giving him a bollocking and saying "look at the state of you..your a police officer" ....truly funny.
Artefact added : 20th March 2013
by foz