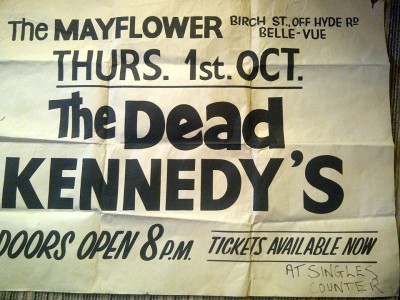 This was a defining moment for me, having seen many English bands at the mayflower and on the back of many other memorable nights in and around Manchester this one sticks in my mind. The Dead Kennedy's, performance at the Mayflower, October 1st 1981. "An innovative and first class post punk band of high energy, wit and intelligence, with a sonic pedigree not seen by me in a USA act, (I never alas saw the Ramones or New York Dolls in their heyday). My memory of that cold October night is getting the bus from salford, into town, then the walk up-to the mayflower, always a scary thing in those days, with local gorton casuals and the like enjoying their favorite sport of "bash the punkers"!
The place was packed, literally to the ceiling and all around the edges of the murky old mayflower people scrambled for footing to reach up to see over the throng of people. I had never seen the place so full thus far in my forays their. The music was electric, fast paced, wonderful banter and wit from Jello, I also remember being fascinated with guitarists, East Bay Ray, he had a most unusual chopping, razor attack style, and played a fender, or telecaster shaped guitar that had a totally perspex body, and looked and sounded so different to me at the time, I was hooked. They had already had some exposure with "California Uber Ales", Holiday in Cambodia and a mention on Top of the pops for "Too Drunk" earlier in the year, so it was a big gig, and I believe they had previously played at the Russel club and the poly the previous year, 1980 or so?
After the gig the next day, this poster was still up in the Virgin Record Shop, so I asked Cyril (Famous virgin security bag checker and local impresario) if I could have it. He said yes, it had pride of place on my mini music room well after I got married and settled down, then was packed away and thought lost in 1994. Yesterday and almost 30+ years after the gig, it was discovered in an old holdall in the attic and was destined to be discarded in a clear out. So- the only full size version of the original poster survives and I share it with you. There would be many more memorable nights left at the old Mayflower, and this is one of my best. For me it was a memorable night as it showed USA bands could compete and could bring an extra dimension to add to the growing third wave UK punk and Oi movement that was building at that time, and of which the mayflower, as noted in many posts on here, became something of a Mecca. A defining moment in Manchester post punk live gig experience, for me at least.
Artefact added : 2nd July 2013
by boy in exile

Abigail Says –
Thanks for sharing such great memories! Like the sound of Ray's guitar...

johng Says –
think there was a bus strike in some areas that night as some of us had to get a train to Gorton(?) station,it was prob the biggest gig i went to there after the crass ones.
wish i had kept all the stuff i collected over the years,great find and upload Boy in exile.
If you'd like to leave a comment, please Login. Login
Manchester Digital Music Archive is licensed under an
Attribution-NonCommercial-ShareAlike 4.0 International License.
Charity no. 1164179
Our archive currently contains 3734 Bands, 739 DJs, 1423 Venues, 261 Industry Professionals and 27924 artefacts contributed by 3859 members.