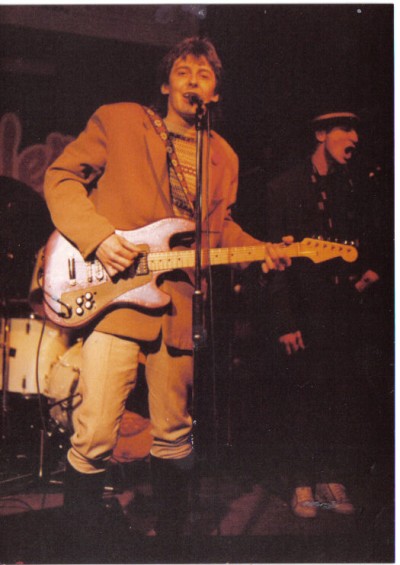 26th Feb. George played regularly at the Gallery, sometimes the crowds were bigger than others, but they always loved him and whichever group of musicians were playing with him. I think this gig may have been billled as 'George Borowski et al', but probably not meaning the Al that's singing next to him. :)
Great biker's boots, you can tell they're new cos they aren't painted blue...or red...or green
Artefact added : 5th June 2007
by aliali

dj Says –
I have seen George many times and he always entertains, i met my wife at the Gallery at one of his gigs 20 years ago but i wont hold that against him. Missed him at Strummercamp this year.
If you'd like to leave a comment, please Login. Login
Manchester Digital Music Archive is licensed under an
Attribution-NonCommercial-ShareAlike 4.0 International License.
Charity no. 1164179
Our archive currently contains 3820 Bands, 743 DJs, 1442 Venues, 298 Industry Professionals and 29014 artefacts contributed by 3940 members.