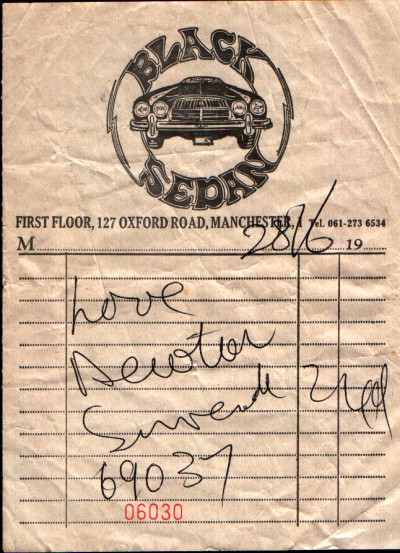 Black Sedan Records was a great "budget"record shop on Oxford Rd (Later it became Pandemonium) Near to Johnny Roadhouse. Most albums were £2.99 I think.
Great Bag if anyone has one ? .Set up by my brothers mate Rick who went to Cheadle Hulme (possibly someone knows more?) He must have been young when he did. Later Black Sedan moved to the University Precinct .
The album is Love ,Devotion & Surrender my Mahavishnu /Santana.

bilko21 Says –
Got some adverts of Black Sedan somewhere will have to track them down - that bit of Oxford Rd must have been a great place at this time - wasn't Music Force offices along there too ?
If you'd like to leave a comment, please Login. Login
Manchester Digital Music Archive is licensed under an
Attribution-NonCommercial-ShareAlike 4.0 International License.
Charity no. 1164179
Our archive currently contains 3873 Bands, 759 DJs, 1464 Venues, 323 Industry Professionals and 29805 artefacts contributed by 4067 members.