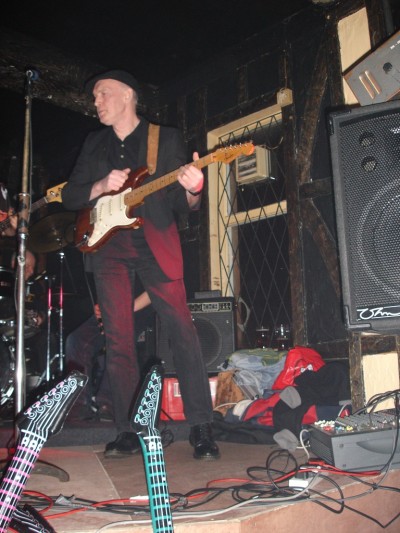 John Dickinson - 1st February, 1947 - 10th September, 2013.
I've got better pics of John but this will do for now. A stalwart of the Manchester and Stockport music scene for 50 years. A greatly respected guitarist and more than that, a mentor to me and a great friend to many. There's a gap in my life that will never be filled and I suspect there's a lot more folk that will be feeling the same way, but none of us will feel the loss as much as the lovely Jackie, his much beloved wife.
Thanks for everything, as you often said in farewell, "In the fullness of time..."
Artefact added : 11th September 2013
by sinuf_mood

Spireman Says –
I went to Cropredy with John. and Jackie for over 25 years and have watched him in the Soul Bandits, The Megaband, The Blues Blasters etc for as many years. Sadly missed A true gent.
If you'd like to leave a comment, please Login. Login
Manchester Digital Music Archive is licensed under an
Attribution-NonCommercial-ShareAlike 4.0 International License.
Charity no. 1164179
Our archive currently contains 3870 Bands, 758 DJs, 1461 Venues, 323 Industry Professionals and 29719 artefacts contributed by 4047 members.