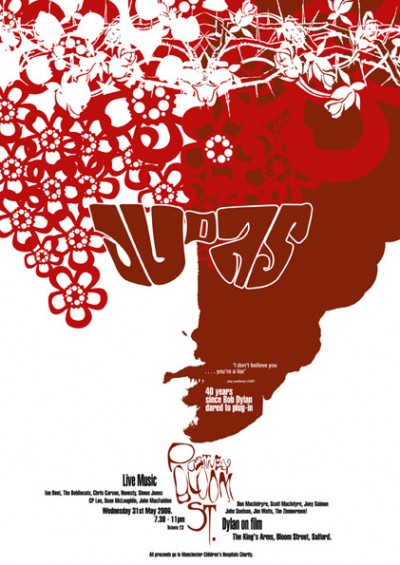 POSITIVELY BLOOM STREET on 31 May 2006 was a gig featuring local singers and bands to mark the 40th anniversary of Bob Dylan's historic concert at the Manchester Free Trade Hall in May 1966.
The poster was designed by Ric Gibbs and shows the iconic face of Dylan wearing a crown of thorns and shades that spell 'Judas!', the infamous heckle that rang out that night back in 1966 presumably because Dylan had 'plugged in' and supposedly turned his back on the folk tradition.
The gig took place at The King's Arms, Bloom Street, Salford and the proceeds from tickets and raffle were donated to the Royal Manchester Children's Hospital Research Equipment Fund.
Details of the event can be seen on the website
www.dylansal.cols....
Artefact added : 5th June 2007
by SSDylan