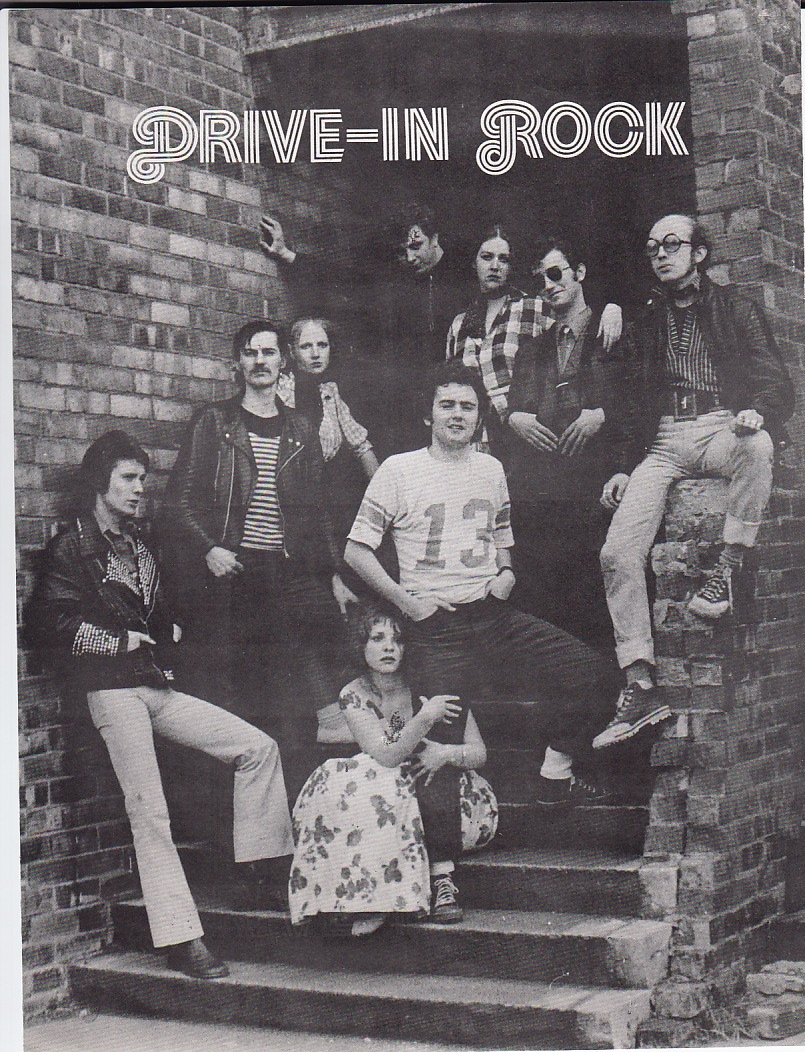 Publicity poster for Drive In Rock and the Rockettes, a Manchester rock'n'roll revival band managed by Roger Eagle. I thought it was taken on the back steps at 355 Wilbraham Rd, where Roger had lived and some of the band members lived, but Dimitri Griliopoulus tells me it was posed at the Odeon Cinema in Stretford. I moved into the shared house and got a role as a Rockette, but this photo pre dates my involvement, so before March 1973 I think. Clockwise,from left to right, with stage names where remembered,Tony Middleton ( Timmy Shirt) Pete Lowe (Pete L'eau), Pat Dooley, Roy (LeRoy), Cathy Hopkins, Dimitri Griliopoulus (Rocco Lampone?), Roger Taylor (Edsel Odeon), Mack (Mack Truck), Lois Hilton. After some years of doing the college and club circuit, the band became Leroy and the Kools and dropped the girl backing singers.
Anne O' Malley was one of the original Rockettes. Some of us still get together occasionally. Sadly Roy and Roger Eagle are no longer with us.
Artefact added : 10th November 2013
by Nicky Crewe

Nicky Crewe Says –
I am now reliably informed that the photo was taken on the steps of the Odeon cinema in Stretford. Wilbraham Rd was home to the Rockettes and Timmy Shirt at the time though.

Sally Coombes Says –
I still have this picture of Drive In Rock. I shared a flat with Roger Taylor aka Edsel Odeon on Whalley Road. They were an amazing band and I remember a particularly great gig at the Art College. I was so sad to hear of the wonderful Roger Eagle's death but didn't know Roy was dead.

edsel odeon Says –
Hi, Nicky! The picture is from late '72, I think, and it was taken at the back of the derelict ESSOLDO cinema in Stretford, not Odeon. Stretford never had an Odeon.
Also Hi! to Sally. Long time no see.

Sally Coombes Says –
Hi Rog/Edsel! As you say, long time no see. I left Manchester in 2003 and now live in Worcestershire. I often think about those days and all the heady times we all had back then. Sadly, I can't say that I'm in touch with anyone from the old days but I'd love to hear from anyone who remembers me!

Tim Shirt Says –
Hi Nicky, Hi Edsel, Hi Sally,
Those were the days, Dim sent me a CD a couple of years ago made from old tapes from around that time. I was first "conscripted" into the band when we all lived in West Didsbury. Pete, Edsel and Dimitri lived in the "Animal House". Sad to hear about Roy. Leroy and the Kools was actually a scaled down "cheaper" version of Drive In Rock for smaller gigs. I left Mcr in late '74 and ran off to join an Irish Showband, well you do don't you? I think the band carried on for a few years with a different line-up. Edsel and Dim would know more details. Greetings from Germany, Tony aka Tim Shirt - still rockin' ;-)
If you'd like to leave a comment, please Login. Login
Manchester Digital Music Archive is licensed under an
Attribution-NonCommercial-ShareAlike 4.0 International License.
Charity no. 1164179
Our archive currently contains 3869 Bands, 758 DJs, 1460 Venues, 323 Industry Professionals and 29710 artefacts contributed by 4047 members.