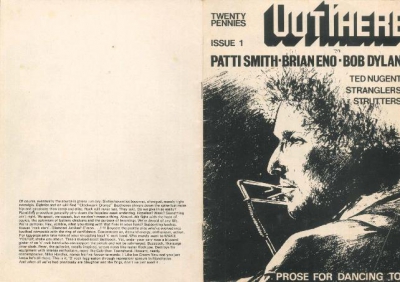 OUT THERE - FRONT AND BACK COVER
Paul Morley's only edition of his fanzine.
Printed on glossy paper and professionally typeset Paul used this as his calling card to get the job with New Musical Express.
A very early report of Buzzcocks contained
Paul writes about this fanzine on p504 onwards in his excellent 'The North' book.
At the time I used to frequent the second hand book shop that Paul worked in. One Saturday we were sat chatting and he said could I hold the fort whilst he went home to see if a telegram had arrived from New Musical Express. Whilst he was absent the owner of the shop turned up and asked who I was and why Paul was no in the shop. To cover for him I said he'd popped out to get some lunch.
Anyway, she waited with me and when he returned clutching said telegram and happily declaring he had got the job she stood up and said, 'ok then f**k off and do your job' and turned to me and asked if I wanted the job. I only stayed a few weeks as by then The Elite had started and it interfered with rehearsals.

Featured in the following MDMArchive online exhibitions:
Fanzine: Out There