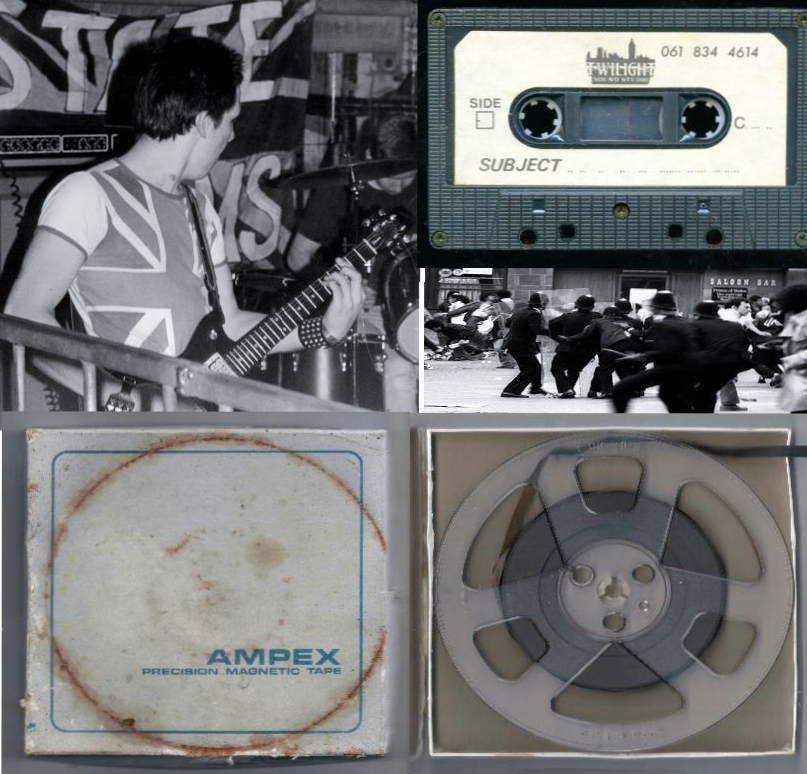 May In 1981- Salford England, a small basement studio of a two bedroom terraced house, was the location for Twilight studio run by Frank Walsh, an inner city safe place, and affordable place to record. Post punk ERA and Salford was in the grip of Mrs Thatchers first term.

Two Salford brothers, Paul and Tony Travis had just split from Salford bands, Terrorist Guitars and the Bouncing Czechs respectively, and were looking for a new musical vessel to express and reassert their DIY music ethic, but in a more vital and relevant way, searching for a new form of ‘working-class protest’,

Later that summer of 1981 the term Oi! would be coined and would comprise ‘a loose alliance of volatile young talents, skins, punks, tearaway s, hooligans, rebels with or without causes united by their class, their spirit, their honesty and their love of furious rock ‘n’ roll’. In the context of a Britain racked by mass unemployment and simmering social tensions.

Thought lost, we recently uncovered and had restored the bands very first demo, the bands experimented with ideas and new songs in the studio, a two piece at the time, they would later place an advert in sounds for a bassist and Singer. The Tape has songs written by Tony Travis and a Terrorist Guitars Cover, (Written by Byrne and Tickle), With Tony on Drums and Guitar and Paul also taking bass guitar & vocals they were joined in the studio that day by their own rabble of Salford urchins and skinheads, with Connelly brothers, Sean and Seamus and Terry Turner providing their own chorus of urban chant.

The Ampex ¼ inch tape, survived Margaret Thatcher, two sets of Riots and 25 years in a shed, its not a musical masterpiece, naive and flawed, out of time and tune in many places, but contains four songs; Revolution on the Streets, Strangeways, Victims of the State & My City.

“An honest reflection and music written in response to the realignments experienced in Thatchers Britain”. It is simple honest music from a bunch of Salford lads, punks at heart, not political or highbrow, but opposed to Thatcher’s assault on the industrial and cultural cornerstones of British working-class life.
Artefact added : 10th February 2014
by boy in exile

strangeways Says –
Nice one Boy in exile, any way we get a listen to this?
If you'd like to leave a comment, please Login. Login
Manchester Digital Music Archive is licensed under an
Attribution-NonCommercial-ShareAlike 4.0 International License.
Charity no. 1164179
Our archive currently contains 3734 Bands, 739 DJs, 1424 Venues, 260 Industry Professionals and 27778 artefacts contributed by 3845 members.