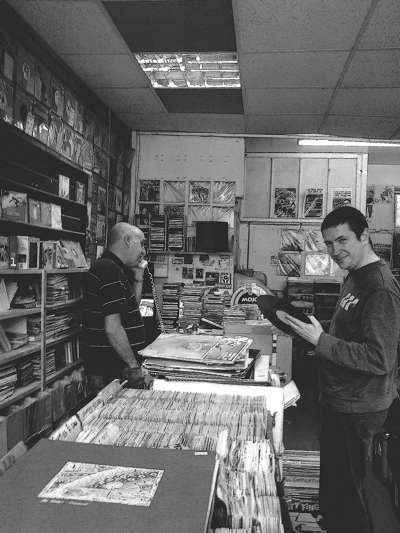 Those of us who feel we must give over our home to boxes full of little round bits of plastic know that the weekly and even daily trawl for your sonic drug of choice means that you see duplicates of things you already have. If they’re inexpensive, you can’t help but give them a home, to trade them, pass them on in kindness or just to stop anyone else from getting them. Obviouly not suffering from this last hoarding disease, Les started doing record fairs to buy and sell. He enjoyed it and could see a way out.

In April 1987 he decided to become his own man and took a stall in Ethel Austin’s a few hundred yards down the road from the shop at 519, next to the post office. Except that they didn’t sell ladies nighties back then. The building housed Chorlton Market- one of those place where they sell meat and pies and knitting wool and fish and cheap kettles, all from different stalls. People would bring records in and King Bee as it was now known, began to get a reputation.

Word quickly spread that here was a feller who had taken a view in the jungle of possible music you could stock and sell who knew about soul and jazz, latin and reggae and punk and rock. Not just a couldn’t care less big table full of chart cds and a few boxes of unloved junk ready for the charity shop, but what was becoming a real shop with an idenity which expressed the passion of it’s captain. Things were getting busy so Les took on staff in the form of young indie fan Rosie- his ruddy cheeks gave him his name.

On Wednesday afternoons, Les (a chap it is impossible to dislike who had been accepted as a knowledgable fellow traveller by most of the many other Manchester independent shops) would leave Rosie in charge taking a run round the city centre stores to gauge the musical temperature and pick up a few pieces for himself.

Temporary deck controller, Rosie would put on his favourite LP by his heroes The Smiths- Meat Is Murder. The title track, penned by miltant veggie troublemaker Morrissey, closes the record. It’s strafed by the sound of cattle howling on their way to the abbatoir.

Les, would get back on Thursday mornings to angry complaints from the Butcher stall across the way. They warned Rosie to turn it off but as he turned it up instead old ladies queuing for chops and cheap sausages would drift off distressed by the sound of about no good for milking cattle about to be steak. Rosie had done a better job than Bigmouth himself. But it was time to go anyway. The stock was growing as were the number of visitors braving the knicker displays and knitting stalls to find Kingbee.

Les moved to the current shop and his now permanent home in September 1987. When he opened the doors he didn’t even have enough stock to fill what he worried might be too big a space. Imagine that now as you try to thread yourself through the throng among the heaving shelves and under counter boxes, the crates and shelves all overcrowded with potential gems and possible delights..."