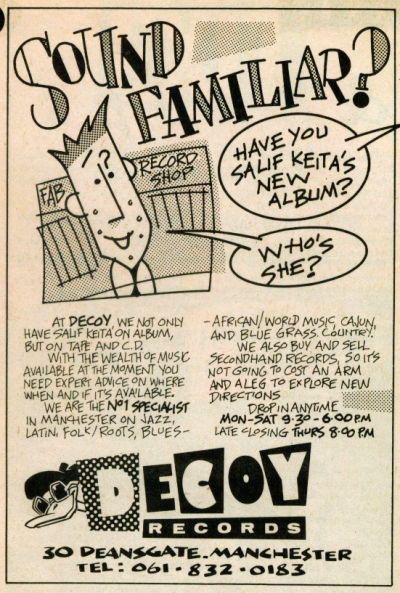 "I worked here .Some great days. The staff were very knowledgeable and great guys - they had their Jack Black snooty " High Fidelity " days but they had charm. Regular customers came from far and wide for those Yazoo and Document blues albums.

Always up to date in the killer Jazz, Blues and the best Folk, Country and World music section in town. Mike and Nick were the top guys and good people to work for.

I recall Charlie Watts shopping here for Jazz records and his cheque being framed. The Stones were in town for one of their MEN arena gigs when Mr Watts graced the shop .

Sadly following the IRA bombing and a massive rates increase its days were numbered. Nick did go on to open the short lived Big Pink shop in the Northern Quarter and Mike has his fingers in many pies (Band On The Wall) for one.

Certainly one of the best and most missed Manchester record shops for many people. Mike Harding used to visit almost every Friday and think nothing of dropping a hundred pounds on the latest Folk and Country records and I would deliver them to his office across town – I clearly recall him purchasing his first Bela Fleck record in wonderment after hearing it playing on the shops turntable.