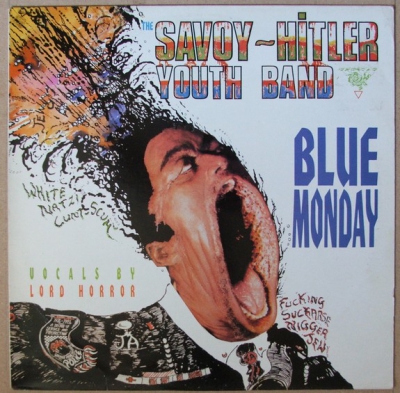 Excerpt from the Savoy website detailing the origins of the 'Lord Horror' character who was based on Chief Constable James Anderton.

Lord Horror featured on a cover of 'Blue Monday' by The Savoy-Hitler Youth Band, the first release on Savoy Records:

"David Britton is co-proprietor with Michael Butterworth of Savoy Books, a publishing company established in the late 1970s. Its early products included a number of previously unpublished books by Michael Moorcock, new editions of novels by Henry Treece, M John Harrison, Nik Cohn, and Jack Trevor Story, a number of books on rock music and a few miscellaneous nonfictional oddities.

The stock carried by Britton's bookshops was and is of a kind which is generally available in similar shops throughout the British Isles. Britton's principal shop, however, happens to be in Greater Manchester, which for many years boasted a Chief Constable named James Anderton who was notorious (or famous, depending on one's point of view) for his muscular Christianity and outspoken illiberalism. Anderton formed a local Obscene Publications Squad (the only one in Britain save for the one based in London) to mount a concerted attack on the sale of pornography in his region; in pursuit of this crusade Britton's Manchester shop was regularly raided during the 1980s and various materials were rather indiscriminately seized therefrom—including some of the Savoy Books titles.

Britton's and Butterworth's response to this hounding was to issue a plush anthology called Savoy Dreams in 1984, which included fiction and non-fiction by many Savoy authors intermingled with newspaper clippings, some exhibiting the kind of bizarre horror stories which regularly appear in British tabloid newspapers and others detailing the exploits of James Anderton.

The first Savoy Records release, in 1986, was a twelve-inch single credited to The Savoy Hitler-Youth Band, featuring 'Lord Horror' on vocals. The record's sleeve featured a caricature of James Anderton, his head exploding amid a tattered halo of hateful obscenities; the lettering on the other side overlaid photographs taken during the liberation of Dachau. The song—which superimposed the lyric of Bruce Springsteen's Cadillac Ranch on a version of New Order's Blue Monday—was actually sung by Bobby Thompson, of Kingsize Taylor and the Dominoes. The cover illustration was sufficient to get the record banned, and a new phase in the conflict between Britton and his bête noire was joined—a conflict uninterrupted by the subsequent retirement of Anderton."