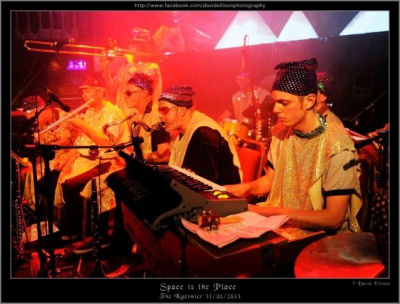 The Part Time Heliocentric Cosmo Drama After School Club was formed in Manchester 2013 to perform at an Sun Ra Festival at The Kazimier Club Liverpool .Essentially a Sun Ra Tribute Band.
The core members of the group having performed Sun Ra s music many times previously in Manchester bands such as Homelife , Toolshed, Spaceheads and 3 Pronged Audio Bath.
Sun Ra visited Manchester a number of times ,Once in the 1960s ,The RNCM twice in the 80s , After his death the band carried on and visited the Deaf Institute and Band On The Wall in recent years.
Artefact added : 22nd February 2014
by graham