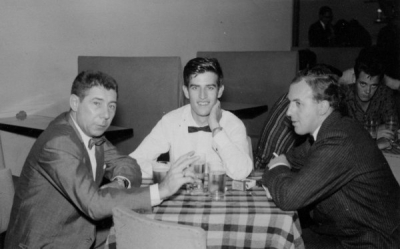 Alan spent childhood in Chingford, Essex, then moved to Cheadle Hulme (near Manchester) at fifteen. Played trombone with the Smoky City Stompers and with the Saints Jazz Band (1951). Led own Bluenote Jazzmen from 1952 until 1958. Own band in Manchester (1958-9). Was a civil servant by day and in this capacity worked in Hong Kong from 1959. Continued to play gigs there and worked alongside American clarinettist Tony Scott. Returned to Manchester in 1962, played piano in Southside Band (1962), was pianist and arranger in Gordon Robinson's Septet (1963-4), which won two European contests in Zurich. Formed own big band in 1964 (which accompanied Earl Hines in 1965), also briefly played in Art Taylor's Group (1965). Own big band played eight year residency in Didsbury (1968-76) and played concerts at Free Trade Hall, Manchester. Alan gave up leading the big band in 1977, but reformed an octet in the 1980s. Continues to arrange for various line-ups including the National Youth Jazz Orchestra and occasionally guests with bands in and around Manchester.