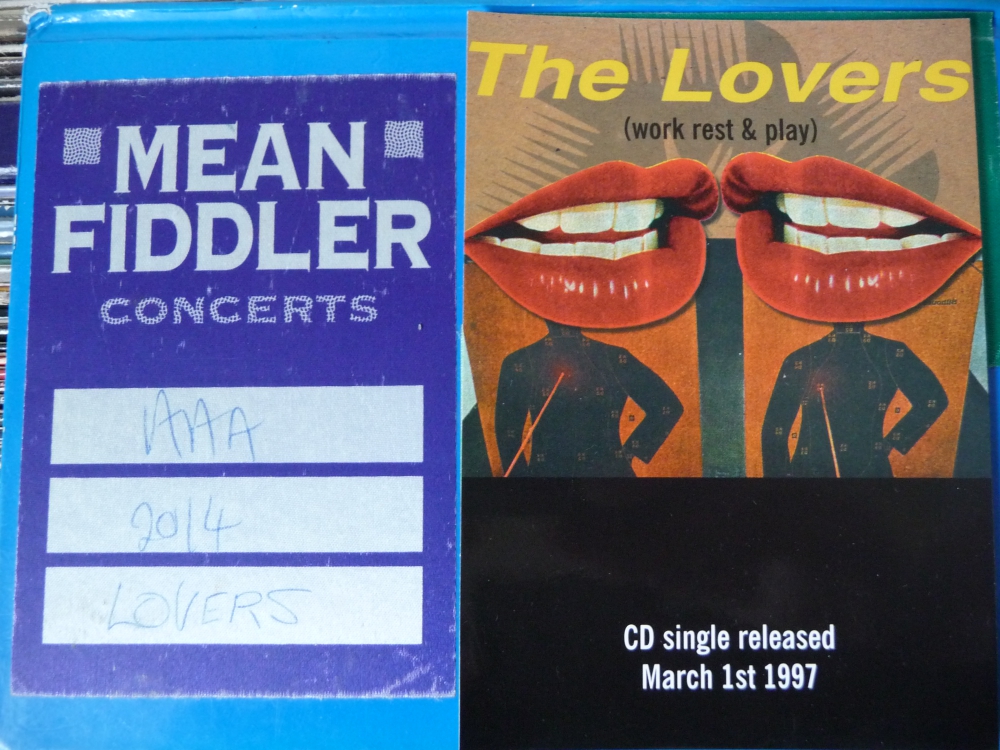 Backstage Pass for The Lovers gig at London Mean Fiddler on 20th April 1997 as part of the benefit concert for Rock The Dock (Liverpool Dockers) in which a CD album was also released by Creation Records that included most of the top indie bands at the time. The Lovers contribution was the song Transparent, which featured Tom Hingley on vocals and Jerry Kelly (Lotus Eaters) on guitar.

Also included the postcard for The Lovers debut single Work, Rest & Play which was released a month earlier and had Denise Johnson on guest vocals on one of the 4 songs
Artefact added : 25th August 2014
by Mr T

Mr T Says –
During the benefit concert at the Mean Fiddler in London on 20th April 1997 were gigs by Tom Hingley & The Lovers and an acoustic set by Noel Gallagher (Oasis), Primal Scream and members of The Clash provided the DJ set.
Originally there was also to be live sets by Julian Cope and Levellers but both had to pull out at last minute due to other schedules.
Also in attendance on the night was Irvine Welsh, Rob Newman, Shane McGowan, Wendy James (Transvision Vamp), Anna Friel, and Dodgy.
If you'd like to leave a comment, please Login. Login
Manchester Digital Music Archive is licensed under an
Attribution-NonCommercial-ShareAlike 4.0 International License.
Charity no. 1164179
Our archive currently contains 3735 Bands, 739 DJs, 1424 Venues, 260 Industry Professionals and 27733 artefacts contributed by 3844 members.