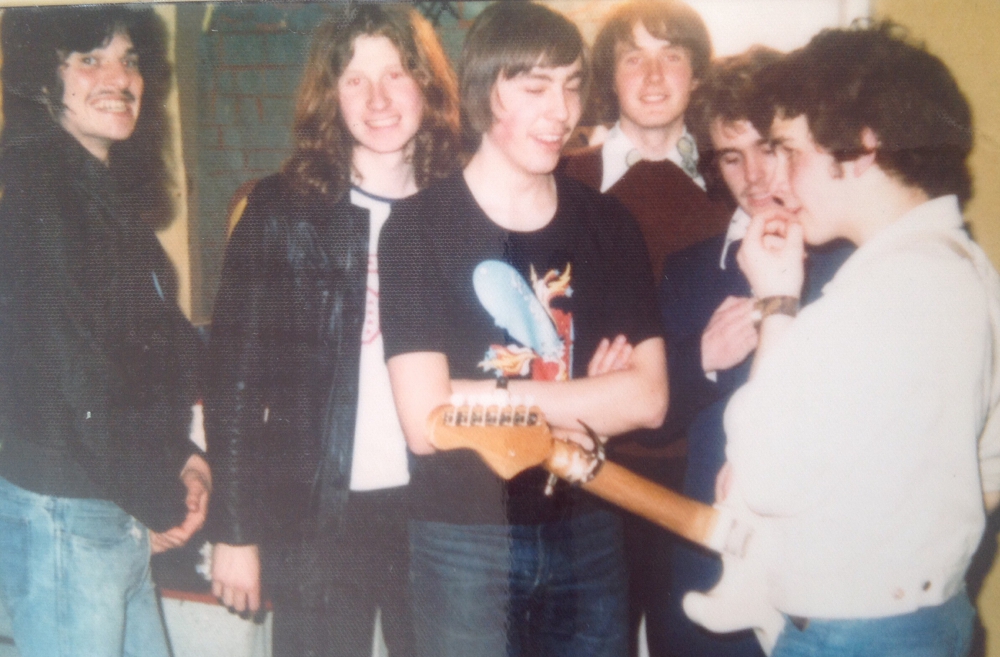 The pic shows Shaun and Mark from SFW at one of our gigs. Shaun and Mark went to St Augustine's GS in Wythenshawe with Ian and Trevor. SFW were a great band and we always felt it was a great compliment when they came to any of our gigs

Ipryce Says –
Came across this site by accident, fabulous. Posted this pic with SFW whose company we enjoyed a lot. Would love to know what became of Shaun and Mark, they were so ahead of their time, and far more talented than the rest of us. Even found a tape I made in about 76 of their stuff which I hope to load soon. Anyone know their contact let me know, thanks. Ian Pryce

Ian Slater Says –
Wasn't Pete Gallagher in SFW? He's on here associated with Casualties/Beat Science/Men Of 992. Do a search!

sinuf_mood Says –
He certainly was in SFW! It has been my great honour to play bass with him for the last 30 years, albeit just studio stuff with Sbilts the last couple of years. Before I had to retire from live playing, I've diary entries for 560 gigs with Pete!
Farewell gig, which was number 556, before the four 'reunion' gigs a couple of years later! A two instrumental medley, one of which has origins in SFW! -
www.youtube.com/w...

Ian Slater Says –
That was quick! Good to hear you're still playing. As I get older I often wonder if people I knew keep at it, I'm in touch with one or two former band members who are still gigging, but since we moved to Oz it's difficult to keep track. I still play bass as an escape from my day job, it's hard though to find like-minded musos here, but I keep going. We're going back for a visit to the Uk in a month or so and I'll get to see Paul one of my band mates from the 80s which will be good.

Caffrey1 Says –
Hi Ian...well....Shaun , Pete Gallagher, Chris Flynn and myself formed SFW in late 1974. We were doing original stuff right from the start really..did the normal youth club, and pub and club circuit for years. Played with John Cooper Clarke, at one gig in Wyhenshawe in 76'..played London , assorted colleges, up and down the land, Deepley Vale and Seasalter Festivals also...lots of gigs.. We morphed into SIC, Pete and Chris left, so it was Shaun, me , a new drummer , Martin Schofield, and Raz on vocals, with Cammy on second guitar...like most bands, we parted company, me and Martin ended up in a NWOBHM band called Touched, which itself was a morph of another band , Dragster..did 2 albums and a single , signed to Ebony Records in the mid 80's. Since then me and Martin have played in The Outsiders UK, gigged a lot in Holland and UK, and still keep my hand in today, as does Martin, who has a successful band practice and studio in Oldham.

Caffrey1 Says –
Funnily enough, Ian, our old SFW drummer, Chris Flynn lives in Oz as well..I d love to have a natter with Ian Pryce as well....I've never seen the photo of me ans Shaun before....real nice to see it.

Caffrey1 Says –
By the way, check out The Bass Guitar site on FB...I'm one of the admins there...we ve got over 15,000 members now....internationally, lots of great bass related banter, advice, etc...

Ipryce Says –
Hey Mark, it's so good that you've picked up on the thread and pleased you still play. Found a 40 year old cassette with some of your stuff plus a few Shaun acoustic bits, and loaded them here (link at end of this post) just pick out the SFW ones and Shaun titles. Also loaded a few taped live songs from a gig we did in 1980, scary! Must catch you sometime. Also found a recent film trailer featuring Shaun and a pic with it, he looks no different! Will post those next. If you are ever around Bedford, Milton Keynes, Leicester let me know
soundcloud.com/ip...
If you'd like to leave a comment, please Login. Login
Manchester Digital Music Archive is licensed under an
Attribution-NonCommercial-ShareAlike 4.0 International License.
Charity no. 1164179
Our archive currently contains 3745 Bands, 739 DJs, 1423 Venues, 277 Industry Professionals and 27962 artefacts contributed by 3878 members.