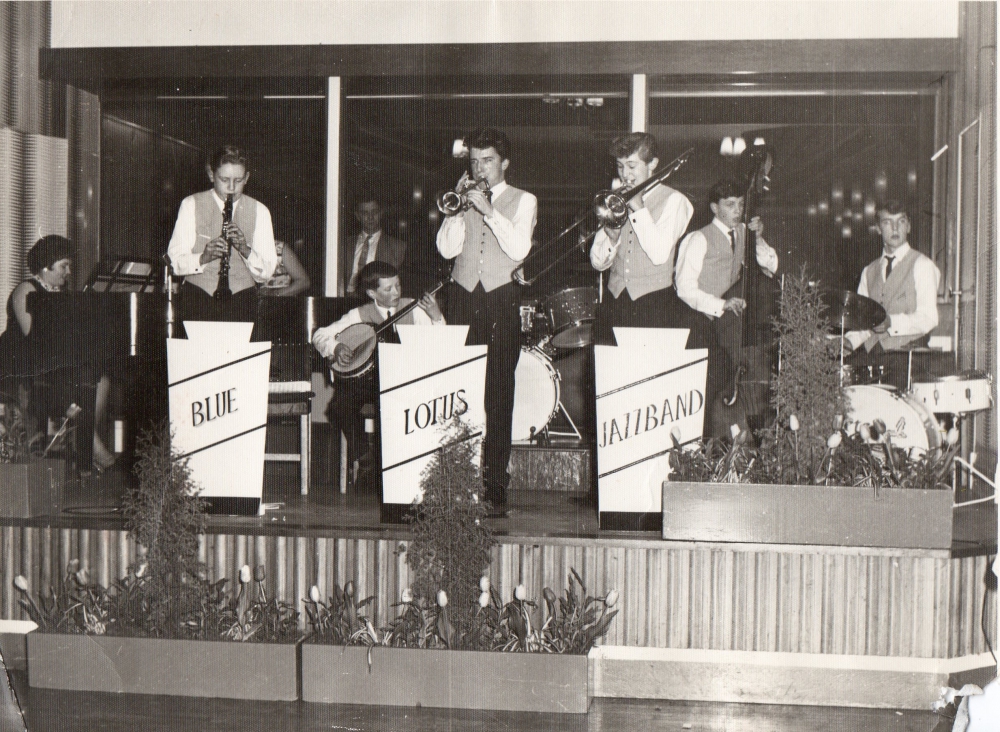 I have added a photograph of the original, founder members of the Blue Lotus Jazzband. It is thought to have been taken in 1963 at Belle Vue.
John Hallam (clarinet), Alan (Talf) Ashton (trumpet), Micky Cooke (trombone), Peter Ashton (drums), Duncan Hollows (double bass), Michael (Charlie) Connor (tenor banjo) and stand in pianist Mrs Watson who replaced Christopher Shaw.
These 6 original male members appeared on Opportunity Knocks, The Royal Albert Hall and The 100 Club, Oxford Street, London, supporting band to Kenny Ball and his Jazzmen.
They also played numerous venues in and around Manchester and also appeared at The Cavern in Liverpool.
Sadly Peter Ashton died in 2010 and Micky Cooke in 2014.
Artefact added : 16th October 2014
by bluelotus

brianellwood Says –
Thanks for the photo. Sorry to hear about Pete and Micky. I joined the band after Peter was taken ill and couldn't fulfil the gigs, and was with them for many years. Great band! Love to see any more photos.

petewilc Says –
Pete Cartlidge .. slight correction to BLUELOTUS text .. ... Duncan Pete Cartlidge ... Small correction .. Duncan did not play on Opportunity Knocks . I joined the band on bass just before the auditions for the show and appeared on the show with the band. I also attended a presentation at Belle View when the band received trophies ( Believe re National Association of Boys Clubs music award ) from Pat Phoenix. I also played at the Cavern Club and a number of gigs around that time. Sad to hear about Micky and Pete. Last time I saw Micky was when he was standing in for George Chisholm at Lincoln Theatre Royal.. believe it was Humphrey Littletons band .. sometime around 1975.

LisaK Says –
Just wanted to add that Michael Connor was my dad. He passed away from cancer in January 2016 (in Australia, where we moved in 1976).

brianellwood Says –
Hi Lisa, remember your Dad well. He Had a great sense of humour! Sorry to hear that he had passed away. best regards, brian (drums).
If you'd like to leave a comment, please Login. Login
Manchester Digital Music Archive is licensed under an
Attribution-NonCommercial-ShareAlike 4.0 International License.
Charity no. 1164179
Our archive currently contains 3831 Bands, 752 DJs, 1454 Venues, 303 Industry Professionals and 29440 artefacts contributed by 3986 members.