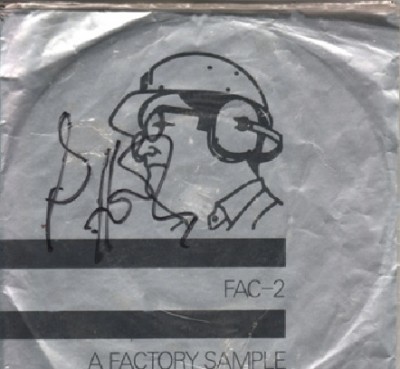 I'm a Yank Joy Division fanatic from day one, living in Los Angeles. Being the JD fanatic I am, I was 3 weeks away from seeing Joy Division play in Hollywood at a club called The Starwood on June 6th, 1980. I am thrilled to see the Rob Gretton material in the MDMArchive as there are pages showing their planned American tour, including the Starwood show and, unbeknownst to me at the time, another planned show at Madame Wong's, a well-known Chinatown Punk venue at the time. I almost got to see them twice!

This is a picture of the first Factory record, "FAC-2 - A Factory Sample" from late 1978. I purchased this record new at that time and have owned it ever since.

I am submitting this artifact because recently New Order's Peter Hook came through Los Angeles on a DJ tour and I had him sign the record sleeve while he was DJ'ing. He looked at it briefly and said "I don't even have one of these meself!", I believe.

(The original image was less than 400 pixels so I increased it by 125%, thus causing minor pixelation. Please accept my apologies.)

mat Says –
that's an interesting story. how did it feel when you found out about JD cancelling the US tour? also how well do you think the tour would have done? do you thinki JD would be big in the states had they played and continued as a band?

Riot Nrrrd? Says –
News travelled slowly back in those days, mat. Rodney Bingenheimer (famous LA DJ - about our only equivalent to Peelie, of sorts - the movie "Mayor Of The Sunset Strip" is about his life) made the announcement of Ian's suicide on his radio show, and I felt like my entire Universe had caved in. I don't think there are words to convey the despair I felt at that moment, really - I just collapsed in tears in front of the radio. I don't remember much other than that, to be honest ...

There were pockets of JD fanaticism in the States back then; I think it's safe to say that the tour would've done really well in New York, San Francisco, Chicago and Los Angeles. Can't really speculate on other cities ...

Would JD have become big in the States? No way - they were too great for dumb Yank mass appeal ;) ...

I will say that I saw New Order's first Los Angeles show a year and a half later (Perkins Palace, Pasadena, Nov. 6th 1981) and it was rather underattended if I recall correctly. But Perkins Palace was a movie theater and larger than both the Starwood and Madame Wong's by a noticable amount. I have little doubt that both JD shows would've been rammed ... (crap, I can't seem to separate these into paragraphs, sorry for the formatting)

mat Says –
there are some (Tony Wilson is one) who think that JD could have become as big as U2 have been over the last 20 or so years.

Riot Nrrrd? Says –
Tony probably thought that about the Mondays as well ;) That's the difference between the UK and the States - when New Order visited the Paradise Garage in New York they were enthralled; if you took the type of person who became the average U2 fan there back in the day, they've have screamed "Ewwww! Gays!!! Disco!!!!!! Let me out of here!" and run screaming out the door. America has never embraced Dance Music culture on a mass scale, even if it's packaged in a Rock-Dance hybrid. JD would've had to stay a "Rock band" (as U2 did), and given what New Order turned into from 1983-1992 (at a minimum), the fact that they even got as successful as they did over here is still somewhat surprising - to me, anyway. Ah, the What Ifs in life ...

Riot Nrrrd? Says –
I can't edit my original post, but it's since been discovered that the date of the planned JD show at The Starwood club in Hollywood was June 9th 1980, not June 6th as I had posted in my original posting.