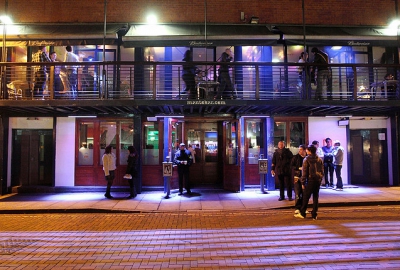 Manto opened in 1990, changing the landscape of Canal Street irreversibly.

The piece on Manto and Carol Ainscow below is by Andy Brydon and is taken from the fantastic Curated Place website, which is well worth a visit. (See link below.)

"Looking at it today it’s hard to believe, but Manto (née 46 Canal Street) could well be the most culturally significant bar in Manchester.

As it stands, a shadow of its former glory, it’s easy to assume that the tired, unkempt drinking den was just another product of the rapid expansion of the Village. However, it’s fair to say that Manto is the place that tore the lid off it all and prepared the ground for Manchester’s gay scene to take on significant mainstream cultural importance as ‘Gaychester’.

The Village grew up around a small number of pubs and clubs in an area of the city centre that, following the demise of the warehouse trade that had sustained Manchester throughout the Industrial Revolution, had become a maze of back alleys and run down warehouses largely forgotten to the general public. As a result it was only generally used as the base for the long distance coach station on Chorlton Street and as a centre of prostitution. As such the area lent itself to the pre-1968 gay lifestyle where it was crucially important not to be seen entering or leaving a venue associated with homosexuality in order to avoid falling foul of the law.

Even into the 1980s there were only a couple of pubs on Canal street where subtle codes and signals ruled the day; if you got off the bus and turned up your collar you’d head for the Union or the Rembrandt as a sign to other people of your inclination. They were the days when gay punters had to “knock twice and ask for Dorothy” in order to get past doors forced to operate a strict policy of secrecy for safety.

However, at the dawn of the 90s everything was to change.

Mantos opened in December 1990 thanks to Bolton property developer Carol Ainscow and her business partner Peter Dalton and marked a groundbreaking sea change in the Village. Gone were the hidden doorways and drawn curtains of the deliberately sleazy, male dominated scene, replaced by the architecture and beverages of European café culture that welcomed a mixed crowd.

In a bold move of style and politics Mantos literally ripped the front off the traditional gay bar replacing the attitude of “only behind closed doors” with full height plate glass windows allowing people to see and to be seen. If you wanted to remain in the closet Mantos was not a place you could hide as it physically embodied the new Mantra of the gay community “we’re here, we’re queer”. "
Artefact added : 20th November 2014
by Abigail