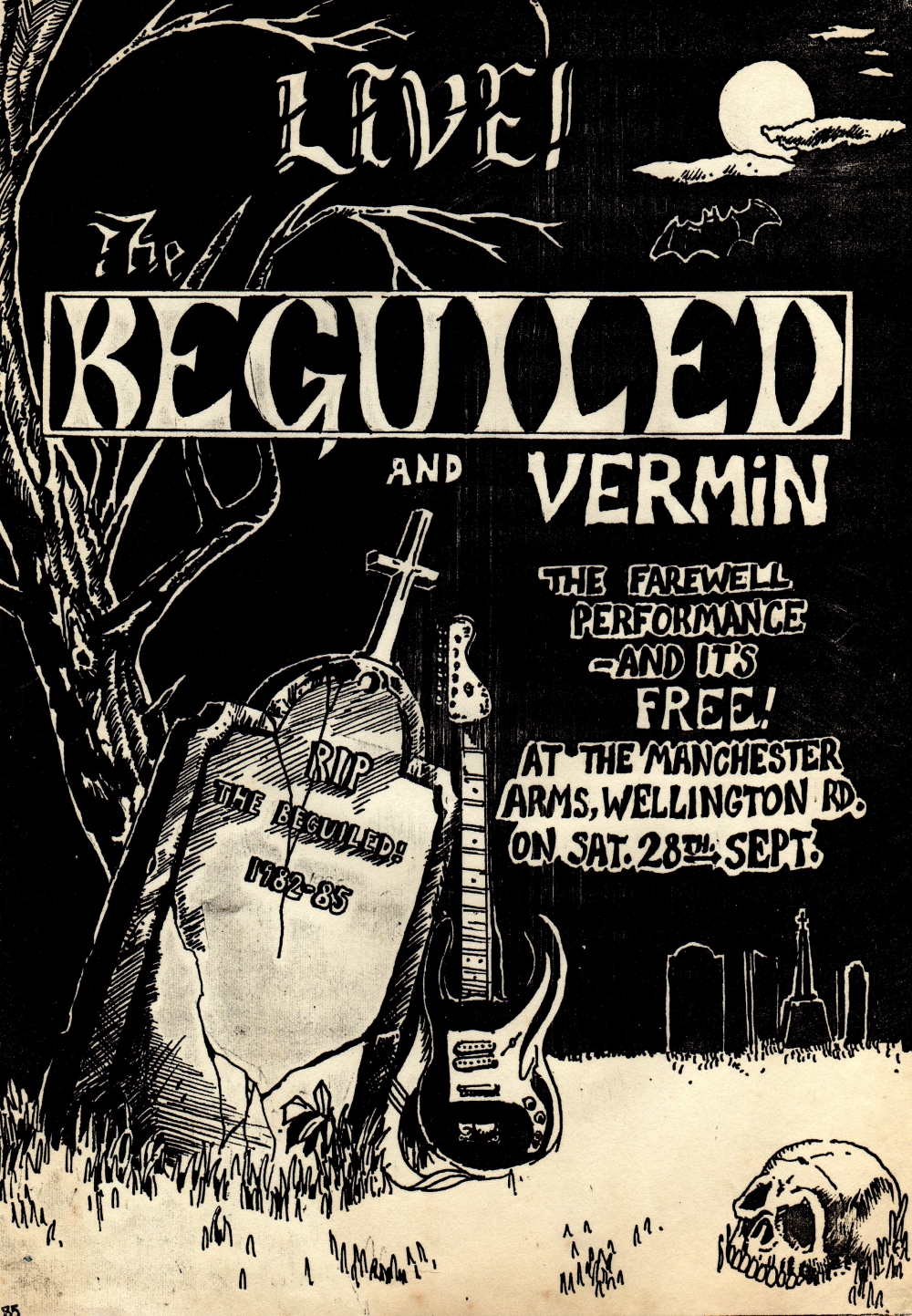 The Manchester Arms was a legendary Stockport pub. Such was the distinctiveness of this august place it deserves us spending some time explaining why it was considered such a Mecca in Stopfordian musical history. This venerable institution stood witness to more Beguiled gigs (if we exclude the numerous school performances) than any other. Indeed, it was a very different type of venue from those the guys were used to playing up to that point. Their first gig there in 1984 was effectively their first 'real world' performance in a get-it-right-or-go-home type of place.

The M.A. stood on a corner of the main A6 and Petersgate in central Stockport and was a popular place for all kinds of local bands to play and cut their musical teeth. Like many pubs in Stockport it was a Robinson's brewery tied house that sold the aggressively hoppy beers supplied by this historic local brewery. This beer was an acquired taste (even for those that had successfully acquired the taste) and, even after some much sampling, was never popular with the band.

The M.A. had a drab, but usable, top room which the management was happy to allow musicians to perform in for free presumably on the assumption it would promote beer sales. This room, on a gig night, was also a good place for the guys to lie low given that on all but one occasion the band were technically too young to legally frequent any pub.

The main bar itself was of traditional design with horse brasses, nicotine coloured wallpaper, stained carpets and treacly pub furniture with classic crimson cushioning on the stools. It had a traditional bar, with hand pumps and well stocked spirits rack and what it lacked in aesthetic appeal it made up in character and reputation. It also had the best jukebox in town if you were of the 'alternative' music persuasion.

I should mention it was also the base for the local chapter of the infamous biker club Satan's Slaves. These were a real, dyed-in-the-wool M.C. gang with their own colours, rituals, unsavoury legends and closely guarded territory with all that involves. Whilst this was by no means a problem it did mean running that risk of some of them might come to the gigs and take exception to the bunch of effete guys prancing around upstairs in their meeting place. Happily this was never an issue and a few members of the club did sample the band before leaving after a few numbers in favour of more pints of Robinson's 'finest'.

All in all the band played The M.A. three times - mostly to good effect - and it was the venue for the last ever Beguiled performance in September 1985. At that final gig all they'd learned up to that point came together to make for a magnificent swan song after which they all went their separate ways never to play together again.

Sadly, like The Beguiled, The M.A. no longer exists. It was converted in the late nineties into a terrible disco-pub called Cobden's which became a popular pick-up joint before it finally lost favour with the Stockport community and now stands empty. Perhaps it's time to return it back to its former glory as an honest to goodness, no-nonsense Stockport pub ready to accommodate the next generation of young musicians.
Artefact added : 21st March 2015
by agboe