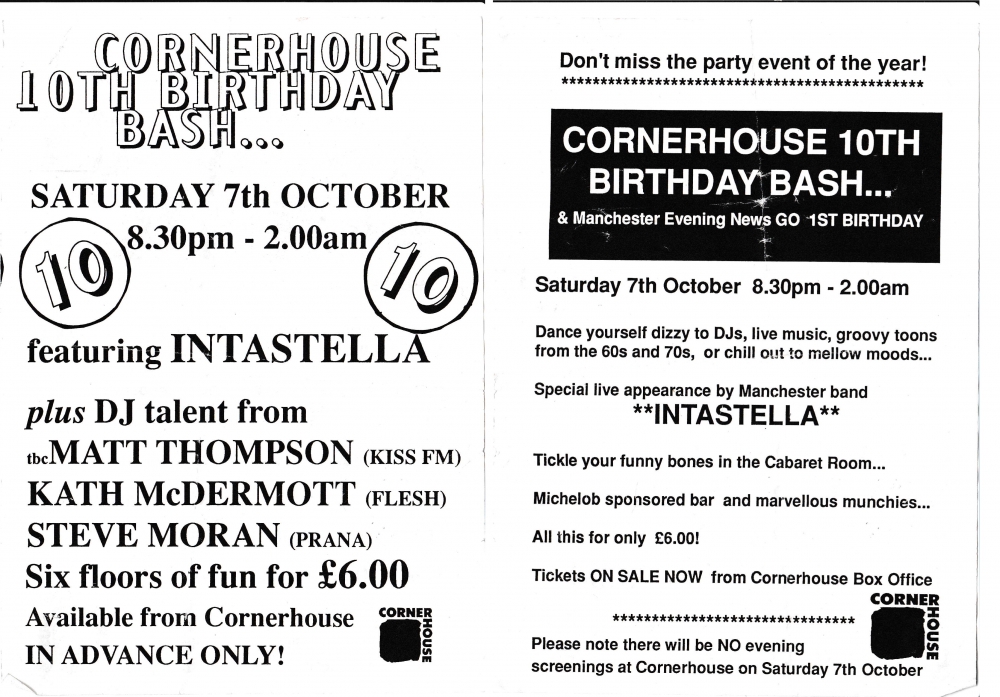 Front and rear of a flyer for the 10th birthday party at Cornerhouse, 1995, featuring Intastella, plus DJs Kath McDermott, Matt Thompson & Steve Moran.

Cornerhouse closes its doors as a cinema, bar and gallery this week. It is moving to a new venue on First Street called HOME.

The Cornerhouse building will be used as an extra teaching space by Manchester Metropolitan University for three years. At that point it is likely the whole of the approach leading up to Oxford Road Station will be redeveloped. It has been proposed that the Cornerhouse building, along with two of Manchester's most characterful pubs, The Salisbury and Grand Central, will be demolished, providing passengers arriving at Oxford Road station with an 'unhindered' view of the Palace Hotel.

The Palace Hotel itself is slated for demolition in 2018. Plans to redevelop this site include situating a new high-rise budget hotel in its place. This ambitious redevelopment links in directly with plans to remove Manchester Cathedral by 2019. The Cathedral, which has been taking up valuable trading space for almost 600 years, will be replaced by a high-rise budget hotel, which will link to the hotel replacing the Palace Hotel by means of an ambitious aeriel walkway.

This aeriel walkway will, by 2020, link to a brand new and undeniably ambitious high-rise budget hotel which will be built on the site of the John Rylands Library on Deansgate, affording hotel guests an 'unhindered' view of Spinningfields.

The confluence of the proposed aerial walkways will be created at First Street and will lead directly into HOME - Manchester's celebrated arts hub - thus increasing footfall to this historic, iconic building - the beating heart of the city's cultural life.

Plans for the first stage of development can be seen via the link below:
Artefact added : 1st April 2015
by Abigail