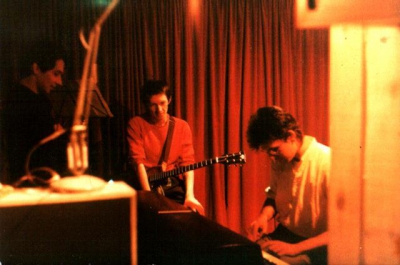 Producer Stuart "Jammer"James introducing Biting Tongues to the wonders of the recording process at Pennine Studios 1979.(Stuart on the left,Graham Massey, Ken Hollings)
Stuart was a producer at Piccadilly Radio in the 70s and recorded many sessions for a program called "Out On Blue 6" ? hosted by Mark Radcliff ? . There was a huge turn out for Stuart's funeral yesterday
where it was evident he had had a huge contribution to the Manchester music scene . He was in The Bicycle Thieves, recorded early radio sessions for Joy Division,The Fall, Crispy Ambulance,Dislocation Dance. Produced many records for New Hormones records. Co produced "Force" for ACR,
Was a tour manager and tech guy for The Smiths, New Order, Durrutti Column,ACR.Chemical Brothers.Swing Out Sister to name a few.Had his own radio show"Alpha Waves" on KissFM in MCR and another one in Brussels where he lived for a number of years. Last gig I saw him perform at as a musician was at the Band On The Wall in 2014 as a member of Eric Random's group.
Artefact added : 23rd July 2015
by graham