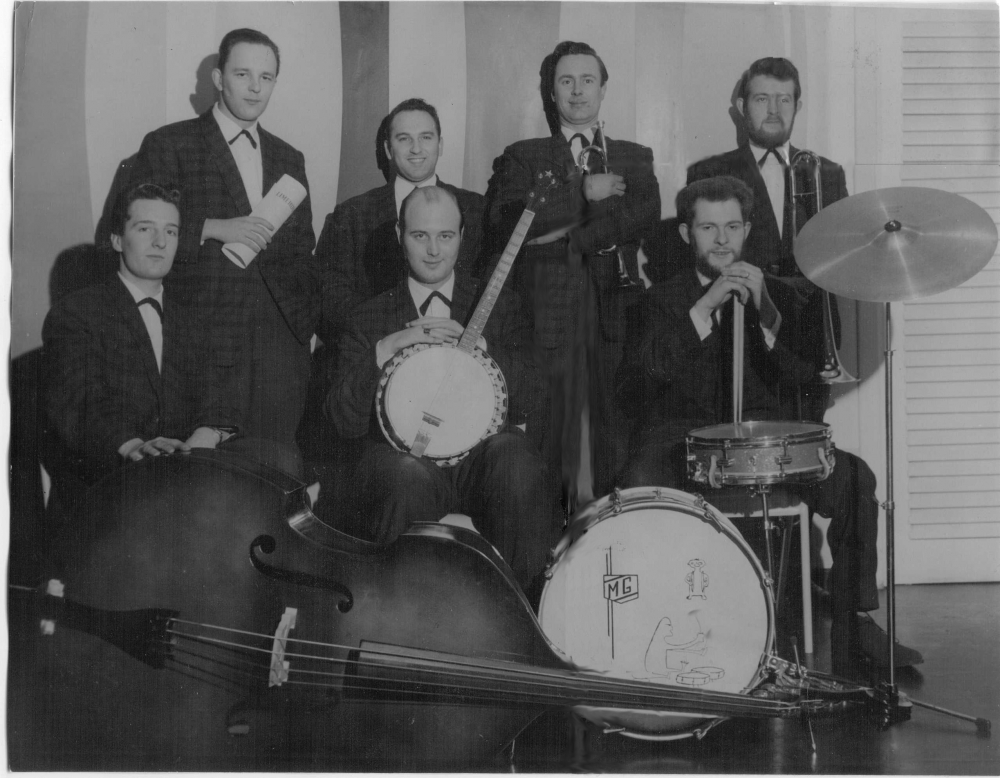 Joe A A Silmon-Monerri writes:

I was looking at Gook's entry about John Featherstone. John and I were in The Jazz Aces together before we both, and Moe Green, also ex-Jazz Aces, joined Tony's band. By the way, there were at least three versions of the Jazz Aces going at the time. The Jazz Aces were for many years based at the Thatched House, Cross Street (a little behind where Boots is now). In 1961, several changes were happening with the line-up. The great Roy Williams (trombone) was called up for the Army and was replaced by Ken Parkinson. It was Dizzy Burton's Jazz Aces. Dizzy was a great trumpet player, who wanted to go pro'. This split the band in two.

Dizzy selected a new personnel line-up, and John Featherstone, Moe Green and I went into Ken's Parkinson's Jazz Aces, We were based at Wynne's Licenced Restaurant on Corporation Street, in a basement forming part of the Corn Exchange. Not long afterwards we were "poached" at Wynne's by the earlier Jazz Aces Manager, Bill Brennan and another friend, with a view to joining Tony Smith's band. We did. it was a really good band. Tony was a very good trumpet lead, who also did vocals, and was an excellent bandleader. Knowing the much better class of Jazz that Tony wanted the band to play, John Featherstone, and excellent pianist among many other talents, and a thorough gentleman, used to invite some of us down to his house in Newnham Avenue, Withington, to listen to his wonderful records and tapes. He was the brains behind the material that Tony's band played. It so happened that most of us loved the Modern Dixieland ("Nicksieland") style, or the Frisco style, and we wanted to play these great tunes. New Orleans Jazz can be a bit limited, as regard chord structures. This was exciting material. So I can say that John Featherstone played a major part in the band. Later, while we and the Beatles played in each other's intervals at the Cavern, Liverpool (the real one!!!), an incident happened and Tony was forced to leave his own band. I was appointed leader. Hence Joe Silmon's Dixielanders. If you look at my website: www.sil4books.co.uk you'll see a picture of the "Wall of Fame". The two band-names appear on it. The photo of me, now, holding a hat, shows my Dixielanders high on the Wall.

John became a well-known Jazz broadcaster. He and Alan Stevens ("Jack Florin" his pen-name as a Manchester Evening News Jazz critic) ran Jazz A Plenty on BBC Radio Manchester, for a number of years, during which they recorded almost all of the Manchester Jazz bands. It was my turn in 1972, with a Stoke-based band called The Old-Fashioned Love Band. This was the Manchester version, which played Dixieland and Mainstream, and was co-led by the great Randy Colville (clarinet/saxes) and me. The live session (later, recorded and put out on another date), took place at the Victoria Inn, Hardman St., (near Crown Court).

I hope you can use the image, and that Gook and Jamie-Lee like it. I knew Grandma June from our visits to hear John's Jazz recordings, and I remember two little girls, (June and Alison???) one of whom must have been Jamie-Lee's Mum.

Every good wish.
Joe A A Silmon-Monerri
Artefact added : 5th August 2015
by Abigail