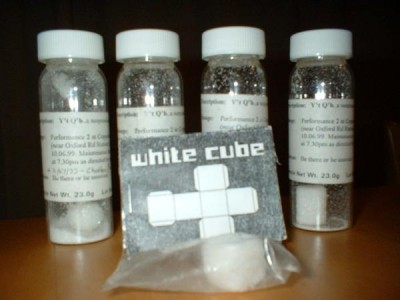 They were then handed out to all and sundry in pubs and venues around manchester during the week before their second performance at Copperface Jacks on 10/06/1999.

mat Says –
i like it - proactive. this is very 'manchester' i think.

dave Says –
I got the sample jars from a lab I worked in and printed the label stickers with the band refered to as a chemical formulation as Yt Qb. Doubt I'd use the sugar in my tea now!

The bag label was designed by Mark and Paul at Fred Aldous art supplies shop on Lever St in town.

Griff Says –
These were mostly dished out at a party in the empty mall at Picadilly bus station. It was the opening of MART, a city-wide contemporary visual art fest.
If you'd like to leave a comment, please Login. Login
Manchester Digital Music Archive is licensed under an
Attribution-NonCommercial-ShareAlike 4.0 International License.
Charity no. 1164179
Our archive currently contains 3870 Bands, 758 DJs, 1461 Venues, 323 Industry Professionals and 29719 artefacts contributed by 4047 members.