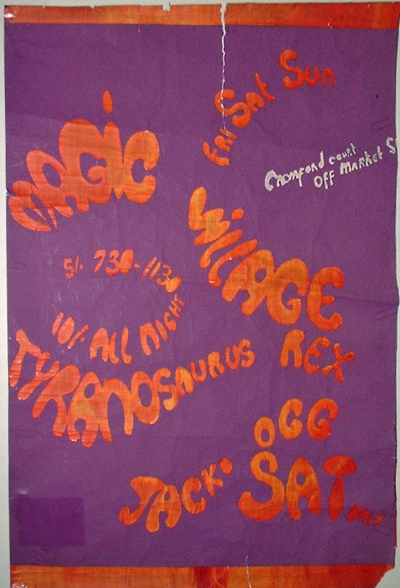 I've been working on Tyrannosaurus Rex releases over this last 2 years (2013-2015) and came across this poster for the Magic Village that is undated, however it also has Jacko Ogg on it, which probably makes it around nov-dec 1967, can anyone throw any light on the exact date
Clive Zone
Artefact added : 13th September 2015
by Clive Zone

Abigail Says –
I've tweeted for help on the date.

Clive Zone Says –
OK, for Tyrannosaurus Rex - the first album came out on July 1st and 'Debora' came out on 19th April, so it'd be in the first 4 months of 1968

Clive Zone Says –
Hi Abigail & CP Lee, are there any local papers that listed gigs in Manchester, that you'd recomend, in 1968 ? the more 'underground' the better !

The spelling of the band is with one "n" and I believe this is an early spelling. Their fan club membership card also had one n so I am guessing this poster was done before any record release!

Clive Zone Says –
Yes, I think it was before the album was released, because they could have looked it up for reference. So maybe just after 'Debora' was released in April/May

Steve Took Says –
M.V. opened Saturday 9th March (with a set by Jacko Ogg). The first Tyrannosaurus album came out 5th July. The poster says that Tyranosaurus and Jacko will only appear on Saturday. That gives us only 16 likely dates. Take away known Saturday gigs (such as 13 April, Royal Festival Hall) and you have even fewer dates.

Clive Zone Says –
so we have 9th March (T.Rex at the Middle Earth), then free on Sats until 13th April (Purcell Room, Southbank, London), 4th May free, 11th May free, 18th May (Southampton University), 25th May (London School Of Economics), 1st June free

Steve Took Says –
Clive, you have accounted for another two Saturdays and I have found an advert for the Magic Village showing the bands booked for June and July. That all narrows it down to 8 probably dates:March 16, 23 or 30, April 6. 20 or 27 and May 4 or 11. If we make the big assumption that the gig was to promote the single (Debora, released April 19), then we have 4 possible dates.

Keswicklemon Says –
Love this one.

Clive Zone Says –
A friend of mine is a Tyrannosaurus Rex researcher, and he makes it 20/4/68 ?

Robcmar Says –
Don't know the date but when I went to the Village to see them, with John Peel in the dj box, they didn't turn up ! Cream had just released their first single Anyone for Tennis.

Clive Zone Says –
Anyone for Tennis was released in May 1968...so sometime in May ?

Although I don't have the book to hand, I believe there to be a full list of the Magic Village gigs in the book called "Roger Eagle, "Sit Down! Listen to This!" by Bill Sykes. This definitely has a date of March 16, 1968 for a Tyrannosaurus Rex gig (though it is essential to check if any other dates for 1968 are mentioned). It doesn't list the support band, but some of us involved with tracing Van der Graaf Generator's gig history are of the opinion that this gig may also have featured VDGG, because Peter Hammill and Judge Smith remember supporting T. Rex at least once at the Magic Village and did a gig of their own there on April 28th,1968. Whilst it is possible that this latter gig is the one with T. Rex, it would seem from the online discussion that T. Rex were elsewhere on that night. So, would it be possible to find out if perhaps Van der Graaf did also support T. Rex on the 16 March, either in addition to, or replacing Jacko Egg.

I hope I've been able to help with confirming the date of March 16.

Ray Pearson Says –
Yeah March 16th 1968 is almost certainly correct. I went and joined the club that evening ( there was a window close to the front door where you signed-up and paid to join; a kinda box-office I guess) . Didn't actually go into The MV until later that evening... Because it didn't serve alcohol...so The Bier Keller came first. When we did get in at around midnight, messers Bolan and P-Took played a nijce set. Van Der Graf were students from the Uni, and played electrified acoustic guitars through little crappy amps and using the small speaker to get feedback. Steve P-T played bongos during the VDGG set. I also picked up a copy of the poster (think I nicked it off the wall near the box- office window as I left). Great poster- hand drawn/written ;deep blue background with lettering in a deep orange/red colour applied with thick acrylic paint. Wonder where I lost that?

Clive Zone Says –
Hi Ray, I'd just like to say a big thank you for taking the time to answer my date of the poster gig question, it probably was your poster... peeled off the wall near the box-office... tuned up for sale at the Northampton bookshop about a year ago, in quite battered condition.. so thanks for all your recollections.......solved xx
If you'd like to leave a comment, please Login. Login
Manchester Digital Music Archive is licensed under an
Attribution-NonCommercial-ShareAlike 4.0 International License.
Charity no. 1164179
Our archive currently contains 3860 Bands, 758 DJs, 1458 Venues, 316 Industry Professionals and 29648 artefacts contributed by 4039 members.