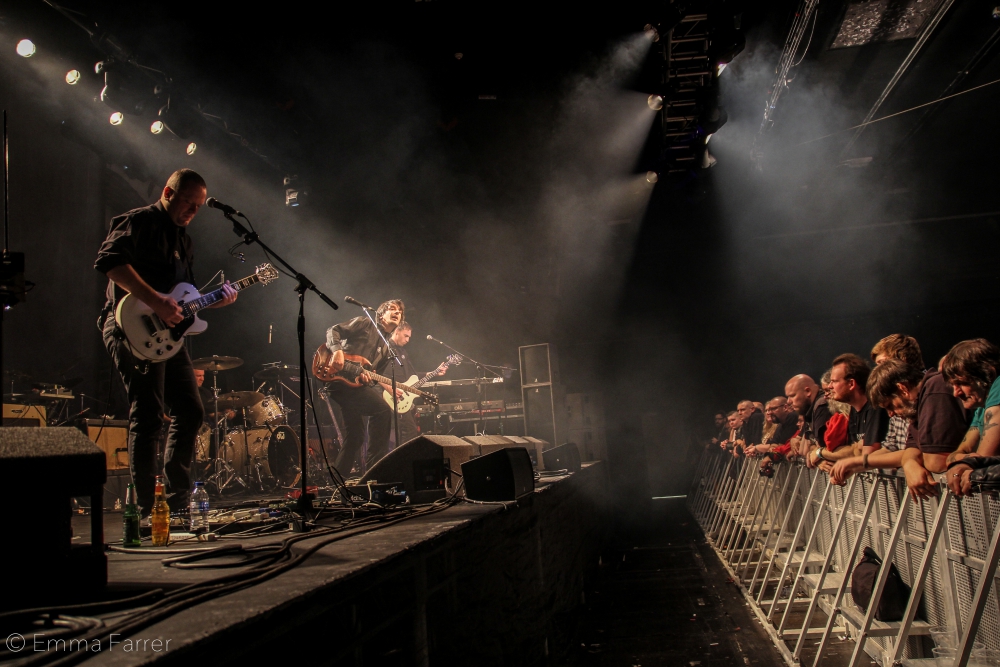 It was one of the oddest gigs I’ve ever been to. Security was tight and a bit jumpy with all the male patrons being given a bag search and pat-down in the street on the way in but no one really checked any of the women. I had a full camera bag but it didn’t even really get looked at.

Despite arriving at 6:30pm we managed to miss all of Prime Sinister and most of The Ruts DC sets because the stage times were incredibly early. Once Amplifier came on they played hard for over an hour dressed in their usual uniform black and wearing their Amplifier ties. The lighting was quite dark, almost monochrome at times and would prove to be the polar opposite of Hawkwind who came on afterwards.

I reckon the Academy was only about two thirds full but the crowd was full of devoted fans some of whom had travelled from America just for the gig. Dave Brock is the only original member still in the band but this didn’t seem to affect the feel of the set which was weird and long with blinding psychedelic projections. I had a photopass to shoot the band under the usual ‘First Three Songs No Flash’ arrangement and on song two a security guard came over and asked me to leave the pit. I said I was happy to go (I discovered that night that I am not a Hawkwind fan) but pointed out that we were technically still only on the second song and it was just very, very long. The guy left me and the other photographers to continue but then came back as soon as the third song had finished and told us to leave even though we were already going. It felt like all the security staff were really on edge that night.

I left the pit and joined my husband who was stood at the front of the room next to the barrier entrance but a security guard called me back and asked me to follow him back through. Thinking I was being taken backstage to see Amplifier (my friend is in the band) I went with him, only to be taken outside via a side door. I politely protested and pointed out that my husband was still inside the venue and didn’t know where I was but I was told I could only come back via the front door if I left my cameras with the cloakroom – I was reluctant to do this but it didn’t matter anyway because once I walked round to the main entrance I discovered that the whole area was fenced off with no one else being allowed in.

I sat on Oxford Road for fifteen minutes or so until my husband eventually got my text and came out to meet me. Once he came outside he wasn’t allowed back in either (and we hadn’t managed to track down our mate from Amplifier) so we cut our losses and walked into town to get the tram. We stumbled upon an anti-austerity rave taking place in Piccadilly Gardens with a big crowd of people dancing, drinking and smoking in the gardens, looked on by a few police officers so we joined that for a bit before going home. Once we were back in our neck of the woods we went to buy some chicken from our local 24 hour KFC but a gang of lads sat outside eating started shouting at us. They wanted us to know that we wouldn’t get served unless we had a car. They hadn’t got a car either but had called a taxi just to get their food order in and they offered to give us a number of a local taxi company so we could eat. We declined their helpful offer and went to the 24 hour Tesco next door instead.

It was one of those odd shambolic Saturday nights where looking back at events you feel like you must have been far more wasted than you realised. Except neither my husband or I were drunk and we hadn’t had anything stronger than a pint of cola all night. Even trying to sum it up I've written something as long and as rambling as a space rock song. I’m putting the whole night down as The Hawkwind Effect.