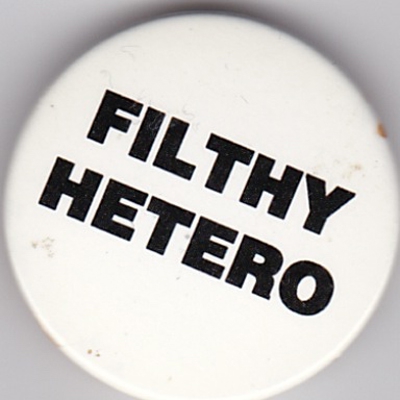 A promo badge for a 12" single of the same name put out on Paul Cons' Flesh Record label in 1994.

'Filthy Hetero' was by Tom Stephan (later Superchumbo). It was recorded at Primetime Studios, and exec produced by DJ Matt Ryan.

I think Primetime was Andy Robinson (New Order) & Nadine Andrews' outfit, but I am bit hazy on this.

I always thought this was a Flesh badge given out at the night, so thank you to user 'BigMouth' for the correction.