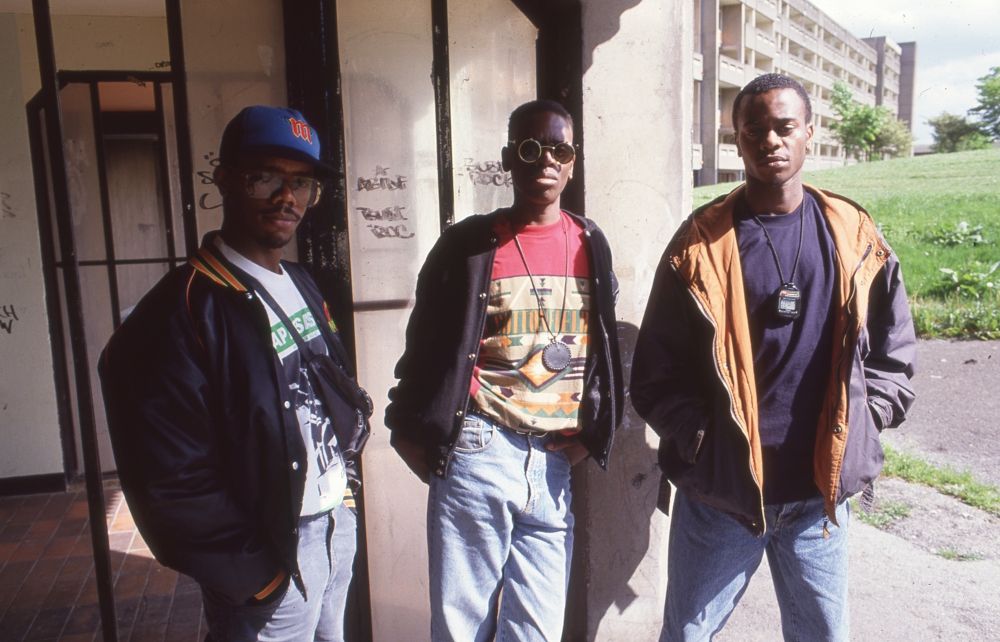 Established in 2010, Original Dope is committed to preserving the legacy of the best hip-hop music on the planet. With a strong emphasis on classic British rap and lost American standards – if it bangs, we bring it! (see link below)

Hulme Crescents (known locally as just The Crescents) was a large housing development situated in the Hulme district of Manchester, England. The scheme was the largest public housing development in Europe, encompassing 3,284 deck-access homes and capacity for over 13,000 people. It gained notoriety as one of the 'worst' public housing schemes in British history and was marred by serious construction and design errors. The problems were so bad the large housing scheme was short-lived and demolition on The Crescents began in 1991 - just 19 years after it was constructed in 1972.

By 1984, the Crescents had become so undesired by prospective residents that Manchester City Council, which lacked sufficient funds to demolish the housing scheme, stopped charging rents entirely from tenants. However the council did still provide electricity to the building to those who needed it. The Crescents became an eclectic place for various subculture groups such as bohemians, criminals and squatters. Unwanted by the council, occupants resorted to altering The Crescents themselves. The Kitchen was an illegal nightclub which was created from three knocked-through flats and was described as a "much wilder alternative" to the nearby Haçienda club. Creative residents proceeded to put their own stamp on the building and covered the dreary grey concrete surfaces in graffiti.

The Guardian critic Owen Hatherley argued that the sense of dereliction made The Crescents a breeding ground for creativity. "All the things bemoaned as deleterious to family life . . . the complexity of the blocks, the noise and sense of height, the lack of a feeling of 'ownership' in the communal areas" turned out to be "perfect" for a different sort of tenant, Manchester's young bohemians, who relished the estate's air of decaying modernism. By the early 80s, it had an art house cinema, club nights run by the soon-to-be-famous Factory Records, and even a "Hulme look" of intense youths in baggy secondhand suits. Hatherley juxtaposes the difference between the Manchester of the 1980s and 2010s: "the very fact that many spaces were unused . . . led to a sense of possibility absent from the sewn-up, high-rent city of today"

Kermit grew up in Moss Side, Manchester - where he learnt to play violin at the age of 6 - and was briefly a DJ under the name of 'DJ la Freak', whilst doing a psychology degree at Manchester Polytechnic. He joined the breakdance crew Broken Glass, who moved into making records with "Style of the Street" following a meeting with Manchester DJ and producer Greg Wilson. The song was recorded for the Street Sounds Electro UK (Street Sounds, 1984) album, but the label owner Morgan Khan was impressed with their work and persuaded them to record more tunes for the album. In order to give the impression of a thriving British hip hop scene, the songs were recorded under a variety of aliases: in truth, of the seven tracks on the album, only one was not recorded by Broken Glass.

Kermit met the Hinds brothers - at the time calling themselves the Dangerous 2 - and together they decided to form the Assassins, with Greg Wilson staying with them as a producer. Their first release was the single "We Don't Kare" (Murdertone, 1987), which had as a B-side a song by Kiss AMC - an all-female Manchester rap group that featured Christine "Kiss" Leveridge, Kermit's sister. They followed this with two singles entirely of their own, "The Meltdown Session" (Murdertone, 1988) and "The Drone Session EP" (Murdertone, 1989) - in between which, Dangerous C performed a rap for a B-side remix of Kym Mazelle's "Useless (I Don't Need You Now)" (Syncopate, 1988).

Following this, the group released Killer Album (Murdertone/EMI, 1990). The album was a mixture of social commentary ("Justice (Just Us)") and more comical tunes ("Jealous MC" or a high-octane cover of The Coaster's "Yakety Yak"). It yielded two minor hit singles in "Just Mellow" and "And It Wasn't A Dream" (a duet with Tracey Carmen). The album received critical praise - UK hip hop magazine Hip Hop Connection (February 1991, No. 25) called it "the best rap album the UK had ever produced" - and even managed to get the single "And It Wasn't A Dream" (Murdertone/EMI, 1990) terrestrial television airplay. But despite making an impact within the scene, and getting crucial support from John Peel at BBC Radio 1 the album failed to translate this into sales. This album was reissued with extra tracks by Original Dope/Cherry Red in October 2010.

Trying again, the group went back to the studio to record their second album Th!nk, It Ain't Illegal Yet, introducing live percussion from Ged Lynch to their usual mix of social commentary ("No Tale, No Twist" told the story of life growing up in Manchester's urban slums, whilst "Down and Dirty" was a sex rhyme featuring "guest vocals" from Jealous MC). Again, the album was liked by the critics and the industry - BBC Television had Dangerous C on an edition of Blue Peter to demonstrate the techniques of sampling and plug the album - but again, this good reception was not reflected in sales. The group split up shortly afterwards.